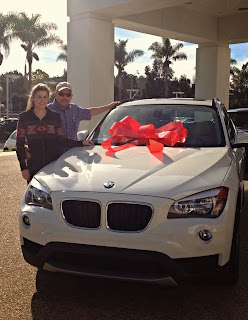 We were not actually car shopping when we stepped on the BMW lot in Santa Barbara but when they wanted to give us such a good trade in deal on my Range Rover Sport we could not walk away. So now we are proud owners of a BMW X1. Sporty yet classy, Scott already has plans on installing surf racks on top. 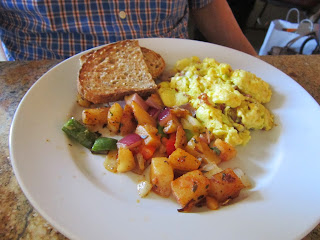 Scott wanted to take me to "Flaming's Steak House" to celebrate but the old place is now "Marmalade Cafe" and so we had brunch instead. The place was hopping and we took our seats to go through a pile of menus. Scott went the breakfast route and settled on scrambled eggs, home style potatoes and toast. He said it was tasty and would return. 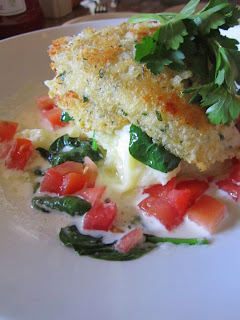 When I saw the Parmesan Crusted Snapper with mashed potatoes, spinach, tomatoes and cream sauce. It was delicious. The portion was large and just really hit the spot, I was truly hungry.
There was tons of things on the menu and I look forward to ordering different things on upcoming visits. So cheers to a new car and new cafe as well!
Posted by Melissa Good Taste at 8:07 AM