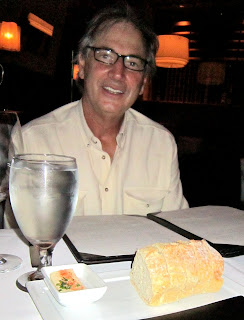 Cowboy Ron did so well in Texas. The night of his finals he marked a solid 215.5 which is very good to non-horsey people who read this blog. In celebration of his work well done we went out to a nice dinner at Eddie V's. Based on recommendation we just had to give it a try! 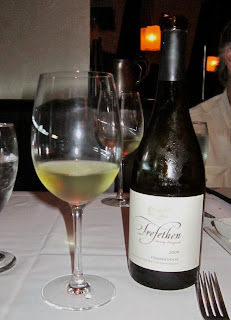 Trefethen Winery is not only a sponsor at the cutting but a friend. We decided we should support them as we celebrated. Great wine! 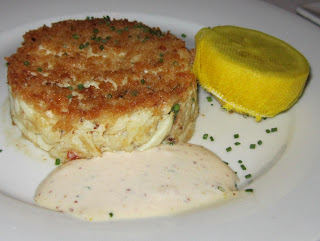 My friend Bobbi said the Crab Cakes are amazing so we all decided to give one a go. It definitely filled with crab. No fillers, it literally fell apart because it was solid crab. It was almost difficult to eat but was very tasty. 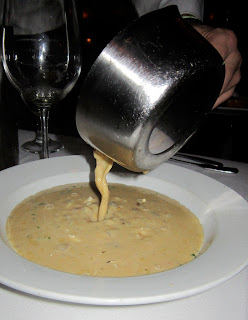 Scott ordered the CRab & Corn Chowder. I took this amazing action shot by accident, but I love it. The chowder was sweet with the caramelized corn and chunks of tender crab. 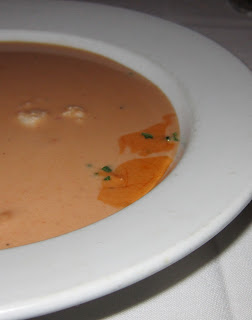 I was almost jealous but my order came out next so I was ok. I ordered the Lobster Bisque and was thrilled. It was so creamy, silky, very naughty and high in calories. I love when a place actually makes their soup in house. 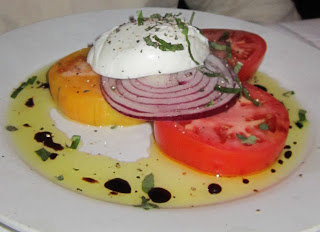 Cowboy Ron went with a Heirloom Tomato Salad complete with Bufala Mozzarella, red onion, basil, olive oil and a reduced balsamic reduction. I have been craving these salads all summer. I just discovered Burrata. I put it on everything now! 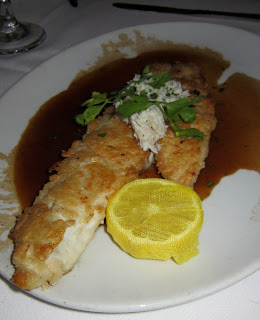 Scott and I both set our sights on the Louisiana Red Fish. It is not something we can order at home so we went outside the box. It was served in a meunière sauce which brown butter, chopped parsley, lemon and in this case, I believe they included Worcestershire as well. They topped the fish with jump crab meat, a nice touch. I was not overwhelmed by the dish, but I am sure glad I ordered something different than what I normally would have gotten. 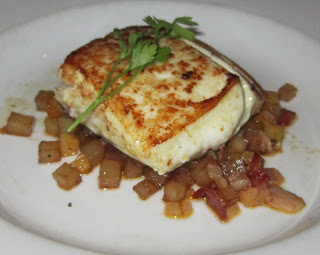 Cowboy Ron ordered the Halibut, it looks beautiful doesn't it. A solid piece of work! 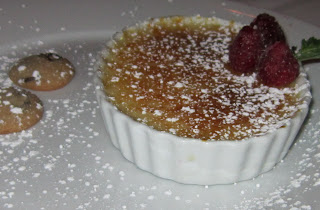 I was stuffed at this point but Cowboy Ron encouraged me to order dessert. Okay, twist my arm! We all had a spoon in hand and sampled them Creme Brulee. It was fantastic. The little cookies they served with were nice to munch on as well.
Thank you Cowboy Ron and congratulations to you!
Posted by Melissa Good Taste at 7:53 AM