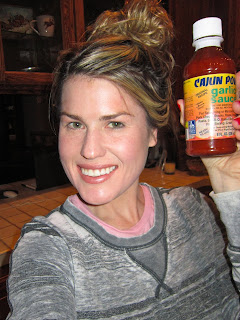 I bought a bottle of Cajun Power Garlic Sauce from the Cajun Kitchen in Ventura in December in hopes of spicing up my kitchen. It has been staring at me on my counter since then, so I dedcided I better use it. I read the recipe on the back of the bottle for Bar-B-Q Shrimp and I thought this sounded fantastic. I knew my fellow blog friend An Immovable Feast loves the sauce so I knew it had to be worth using. 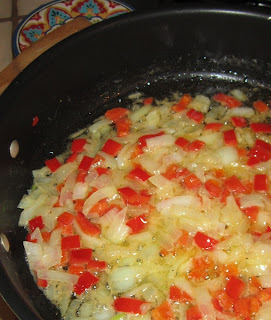 You start off chopping up one red pepper and they suggest two onions. Allow them to cook in butter until they are tender. I let them cook on low for a long time because I like that caramelized sweetness that the onions bring after a long time over a low flame. 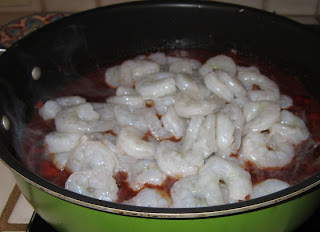 The back of the bottle recommended using only 6 ounces of the 8 ounce bottle but I went ahead and used the entire thing with an ounce of Worcestershire sauce too. After that the shrimp went in the pool and it all simmered together for 15 minutes. So easy! 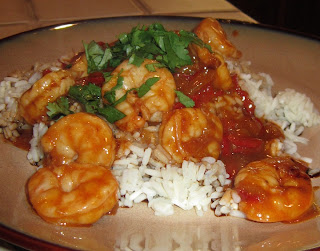 While the shrimp was cooking fluffed up some Birds Eye White Rice in the microwave, chopped up some cilantro and served up my shrimp and sauce. It was delicious! It easily serves four as we have a lot of left overs. I will defintely make this again! My southern style meal came just in time with all the talk about the Cajun Superbowl!

Posted by Melissa Good Taste at 8:05 AM