Yesterday was rainy and chilly so I busted out my trusty dutch oven and tried my hand at home made soup. It wasn't to be fancy but to warm our bones.  This is what went down... 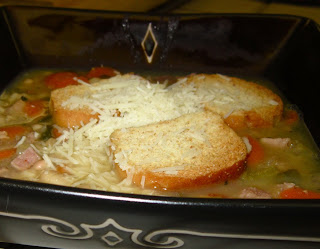 I sliced up a few carrots, celery, half an onion and a few cloves of garlic and dropped them in a pool of chicken broth. Diced ham and crisp bacon made their way as well. Two cans of Northern white beans rounded out the entire concotion. Salt, pepper and herbs de Provence are what I used to season up the bath but you could use what ever you have on hand. When Scott walked in the hose he smelled the pot of soup and declared himself cold and hungry. What an easy thing to do! 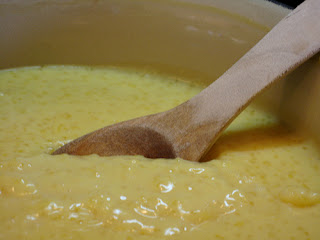 After soup we both got a hankering for something sweet. It was just too cold for ice cream so I whipped up some tapioca pudding. I followed the exact directions from the Minute Tapioca box except for adding more vanilla. This was too easy as well, we couldn't wait for it to set up so we ate it a little warm.

Our food was soft and mushy but I have to admit it was very comforting. Stay warm this season!

Posted by Melissa Good Taste at 8:17 AM