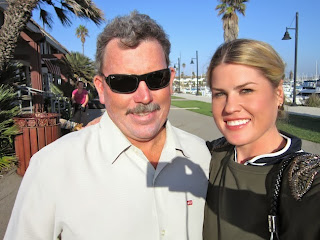 Scott Good Taste did some foodie recon and discovered something that I had totally been missing out on... "Wet Wednesdays", a food truck gathering at the Channel Island Harbor in Oxnard. So after his evening session, we met up to get our tasting on! 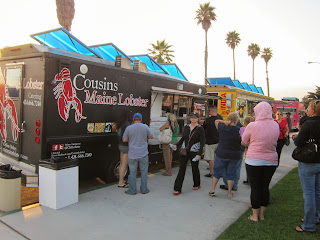 There were probably 10 trucks there and all seemed to be doing very good business. There were lines at every truck. 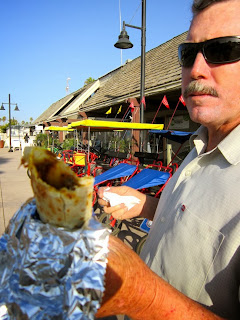 We started at an Indian food truck called, "India Jones Chow Truck". Scott ordered a Roti, which was basically like a burrito made with flat bread, housing chopped onions, tamarind chutney and grilled beef. He absolutely loved it and said he would return back next week to order just that. 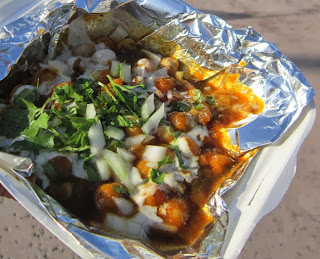 I ordered the "Aloo Tikki Chaat" which was a potato pancake topped with chickpeas, raita, chopped onions and chickpea vermicelli. It too was fantastic. Perfect portion size for the price, just four dollars. 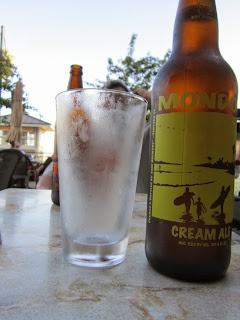 We took a break for a frosty beverage at Seafresh and cooled off our spicy mouth with a Mondos Cream Ale. I love that beer! 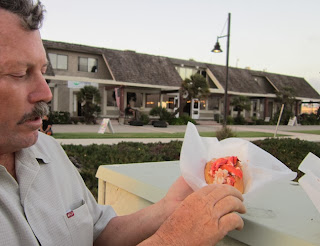 Next up Lobster Rolls! The Cousin's Maine Lobster Truck had the longest line so we decided we just had to get in on that action. We waited for about 15 minutes but chatted up nice people in line so it went really fast... 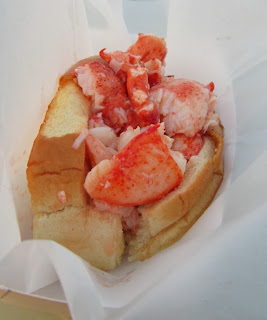 We ordered ours "Conneticut Style" which was hot with butter. $12 will get you this bad boy! It had tons of hope and anticipation riding on my first bite... drum roll please..... It was just ok. I ate the entire thing in three bites, and didn't crave more. I would most likely try something else next time, like the Lobster bisque they ran out of just before we hit the counter.

But what fun! Thank you Scott Good Taste for the interactive eating experience. All you local readers better get out there and try it too. A lot of fun for the kids too!
Posted by Melissa Good Taste at 11:36 AM