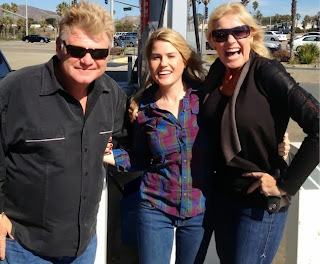 Scott and I set out on a date day hoping to spend the whole day at the beach, but the wind nixed those plans. We instead switched it up and decided to run some errands. One of our stops included running into Dan and Laura Dotson from the television show, "Storage Wars". They were so nice! 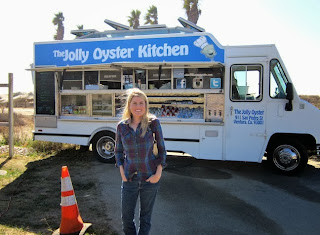 I have wanted to dine at The Jolly Oyster for ever, but they are only set up on Fridays and weekends when we are usually out of town horse showing it. They are set up at the Buenaventura State Beach Park so go through the gate and wrap around to the back of the lot to find them. 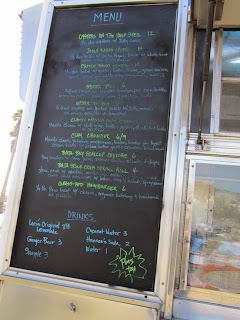 Everything on the menu sounded great but Scott and I controlled ourselves and only ordered a few things to share. 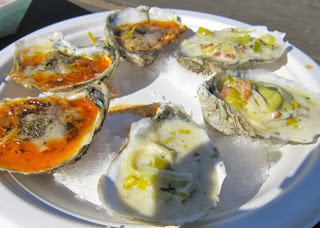 We started with a split of "Jolly Oysters" on the right which were baked with leeks, thyme,bacon in a white wine cream sauce. It sort of tasted like a clam chowder baked oyster. They were Scott's favorite. On the left were "Creole Baked Oysters" baked with garlic, butter, herbs, green onions, creole seasonings, white wine, parmesan and lemon zest. And, I preferred these. 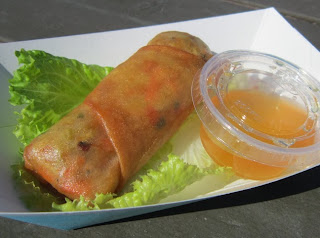 We both saw the Baja Stone Crab Spring Roll and wanted to try it. It was delicious crisp roll of stone crab, shitake mushrooms, cabbage, green onions and carrots. The sweet and sour dipping sauce just made this! 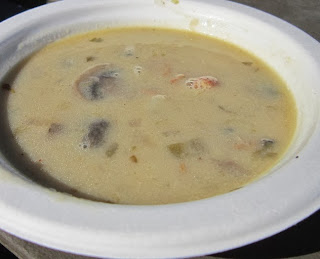 I was surprised when Scott wanted to try the Clam Chowder but he did and I happily shared it with him as well. The Clam Chowder was much more reminiscent of an Oyster Stew. It was packed full of them and the consistency was much thinner than your average chowder. I thought it was delicious!

All in all, I was very impressed with The Jolly Oyster. The quality of the food that came out of that food truck was amazing! I will return, hopefully on a less windy day!
Posted by Melissa Good Taste at 8:25 AM

I told you that the Jolly Oyster is great place to go! So glad you and Scott enjoyed it!
JW