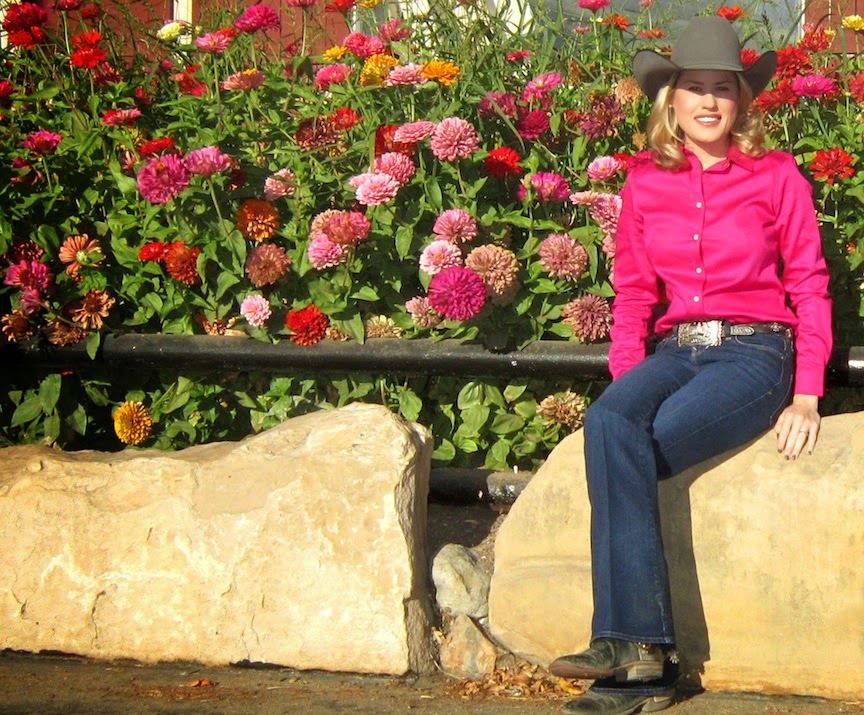 We spent the last few days cutting up at the Double R Cutting held at the Mid State Fairgrounds in Paso Robles. Scott did extremely well showing his futurity, derby and novice horse so I was very proud of him. Our customers showed in the pen as well and took a little bit of the pie with them as well! It was a great show for Team Weis that is for sure! 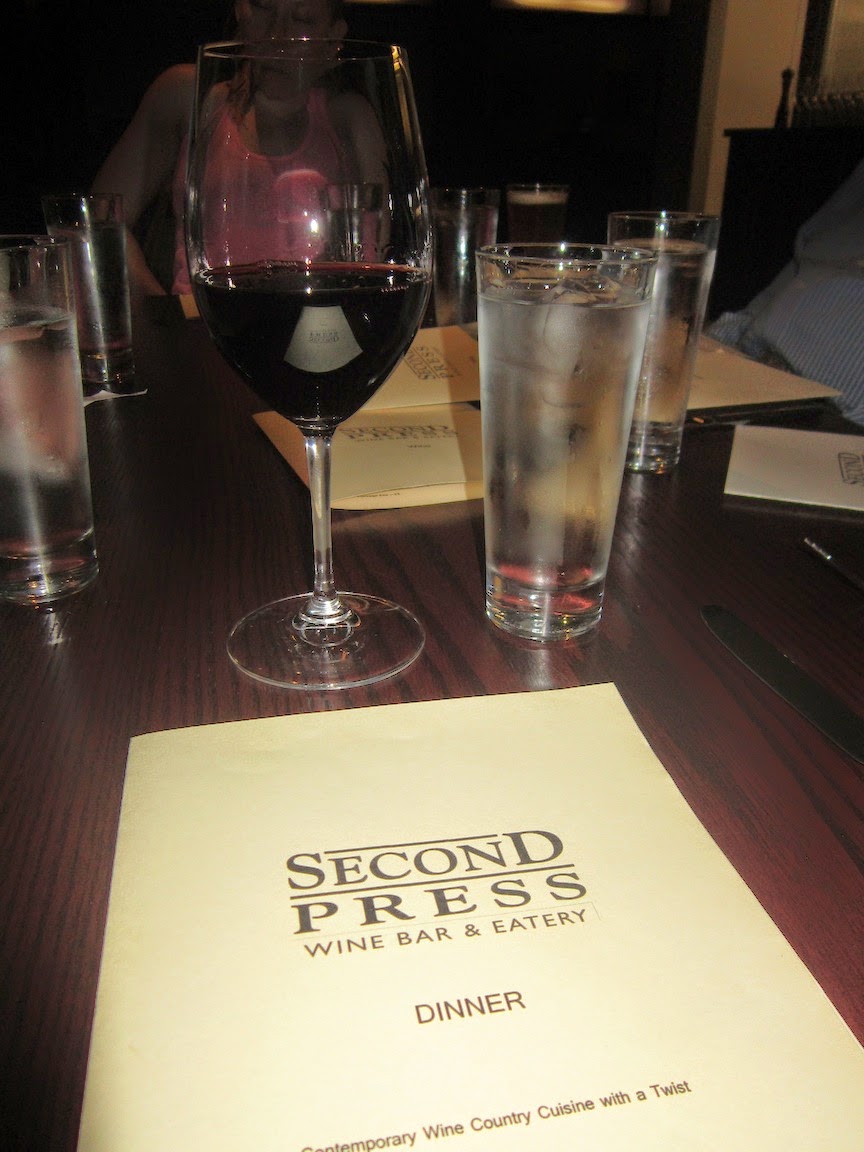 On Friday night we got to visit I had never been to before. Second Press is located on 12th Street just down from the movie thearter. Parking n this area is pretty sparse so be prepared to find a side street. Our reservation was for about 8:30 so I knew the waitresses were probably running out of steam on their shifts. I was right, we were greeted with not much enthusiasm. Scott and Ron grabbed draft beers and I the Lone madrone Cab. 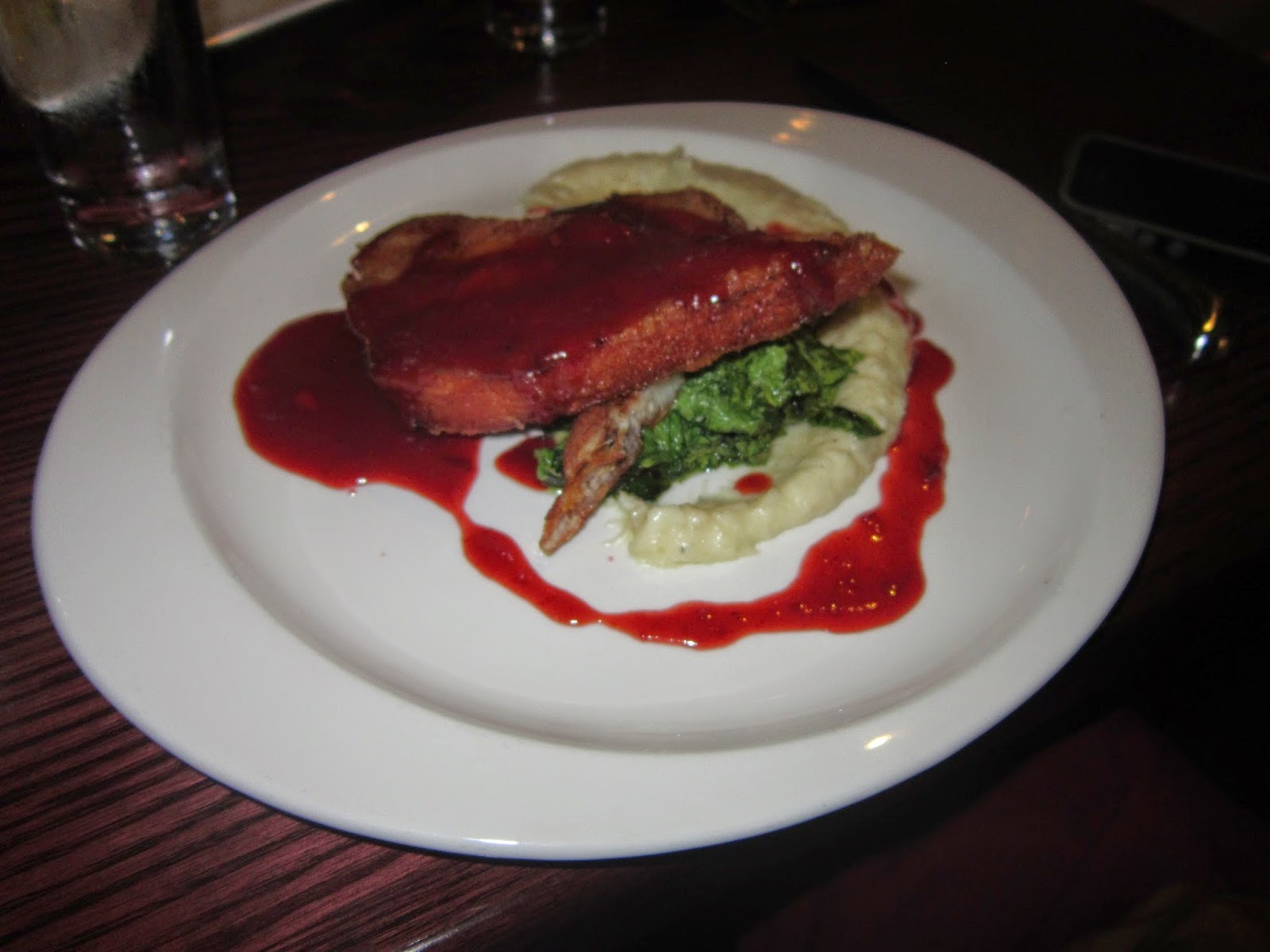 Our food came out as described to us and I was really torn on ordering this dish. Ron had this Pork Belly served on a potato puree and he drizzle. He said it was nice and I believed him. I love a good braised pork belly! 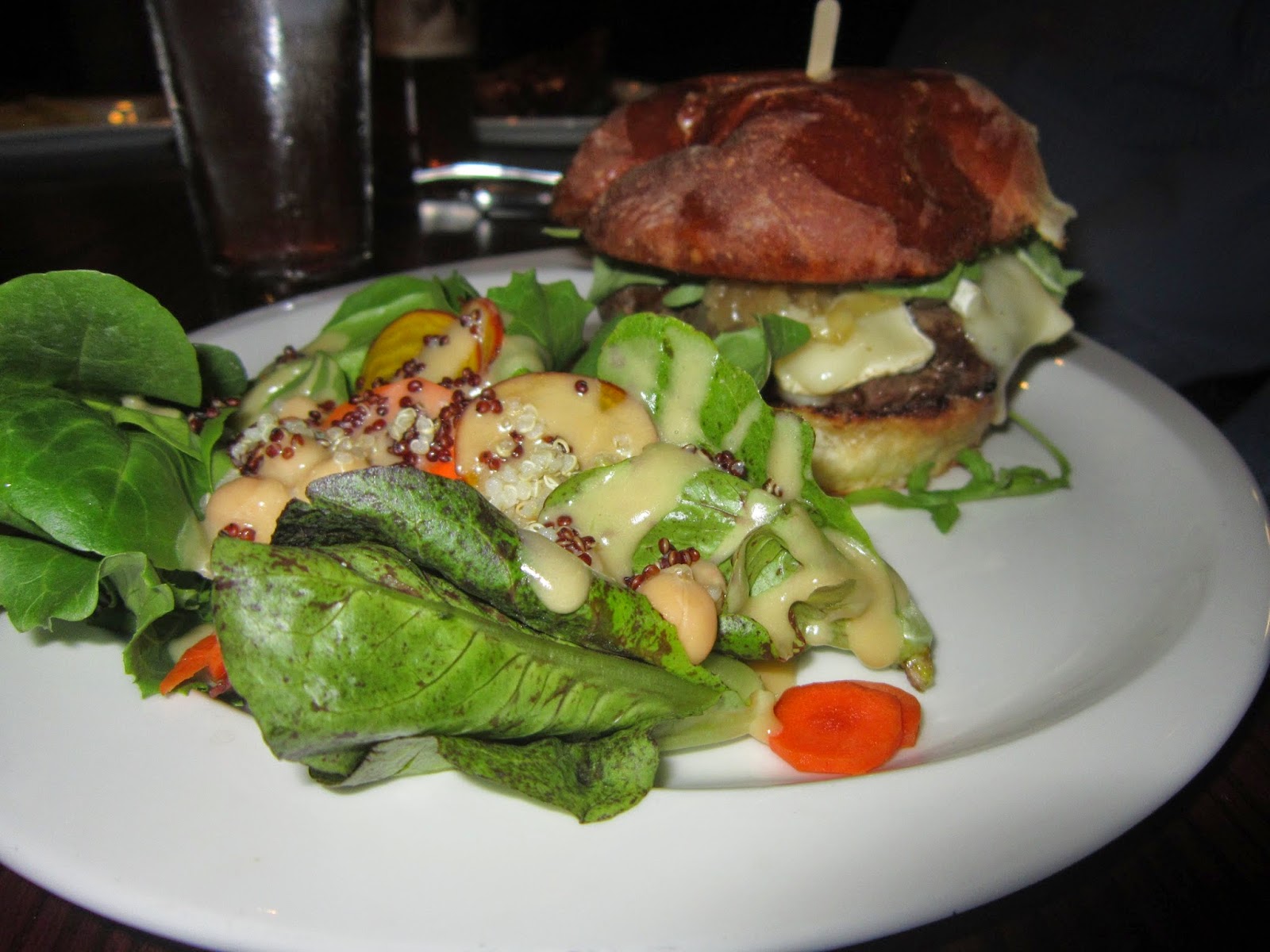 Scott went for the Cheeseburger and opted his fries out for salad. Unfortunately it was not the best burger he has ever had. He thought the meat tasted gamey and thought maybe the grass feed beef was the reason. I guess he likes his beef raised on corn in a feedlot! 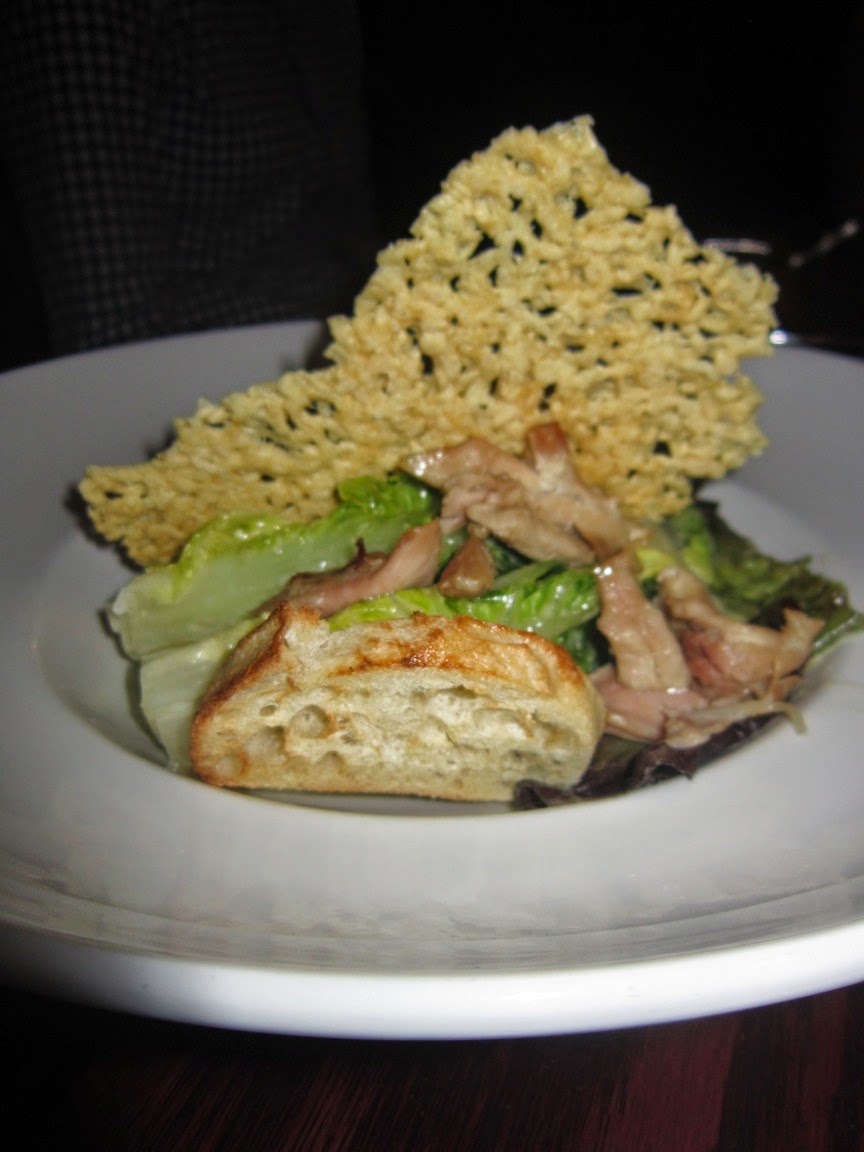 Deb went for something very boring... A Caesar with chicken added to it. The only cool thing about this dish was the parmesan lattice crisp. I have always loved when salads are served with these. 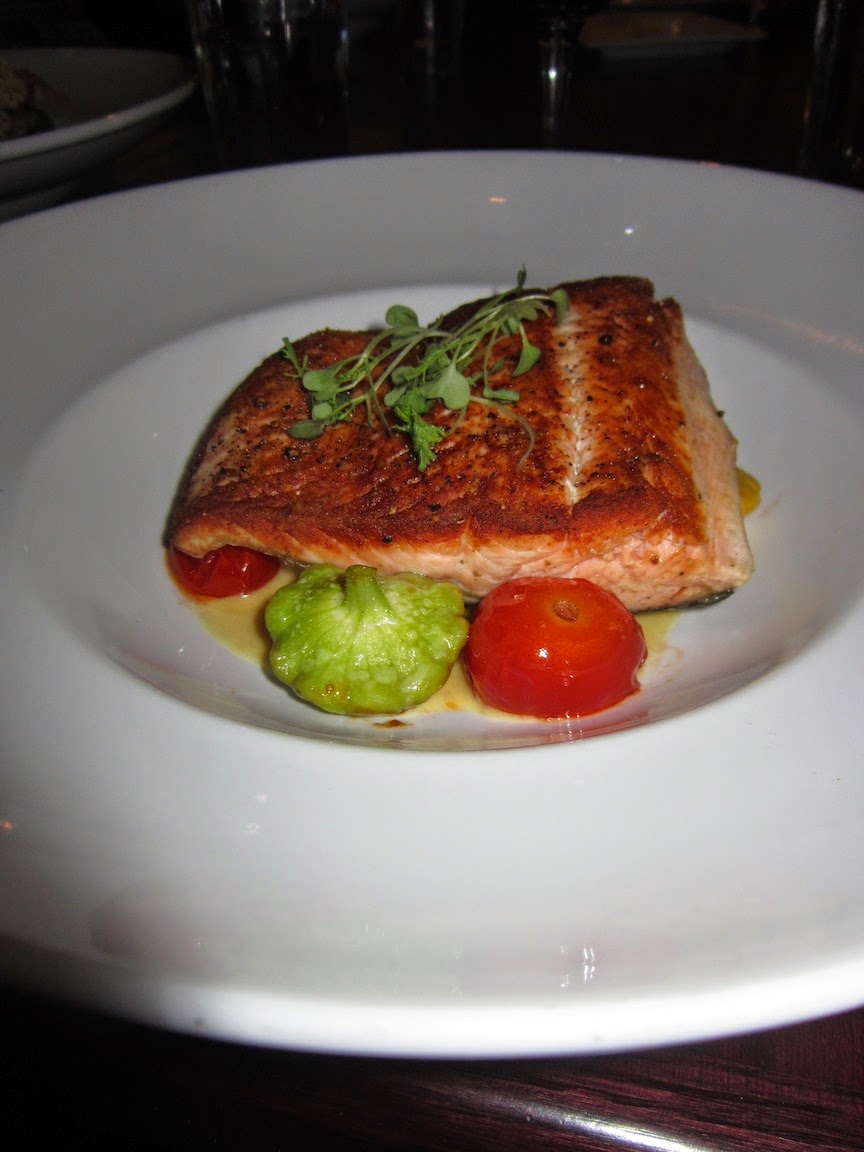 Cara and I both ordered the Salmon served with gnocchi in a saffron white wine sauce, sunburst squash, baby zucchini and roasted tomatoes. First off the portion size and temperature of the salmon came out perfect! Wonderfully cooked. I was served five pieces of gnocchi which seemed a little skimpy, it was delicious though. Now here is the my issue, the tomatoes were cooked until mush but then the squash and zucchini were hard as bricks! It should be the other way around my friends, I couldn't even slice the squash with a knife because it was so hard and slipped around the plate, completely a waste. 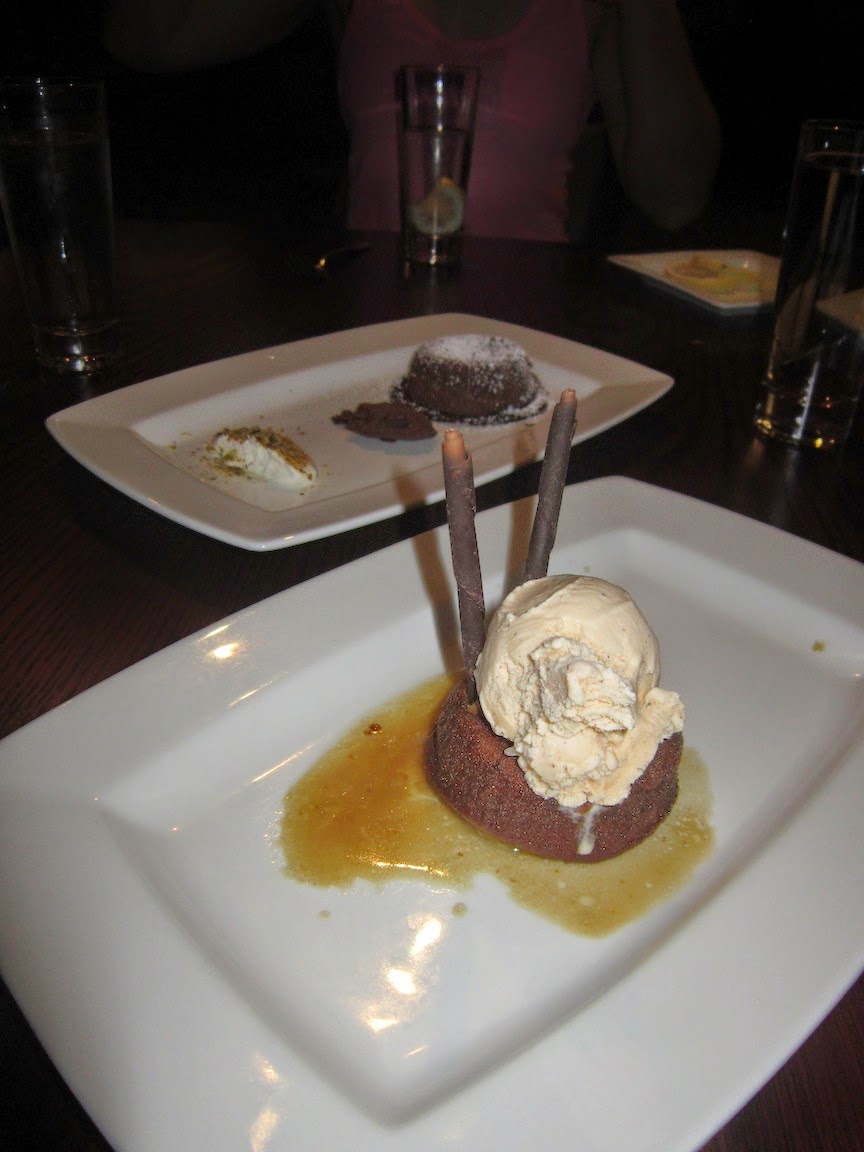 My table mates and I were talked into the Sticky Toffee Pudding and Chocolate Fondant served with whipped cream and ganache. They were fine, nice for sharing. The chocolate helped me finish up the rest of my red wine.
I am very conflicted on this review. I was disappointed in lack of enthusiasm from our server, I liked portions of dishes. I thought the prices were reasonable, but twas disappointed with portions of main entrees. I go back and forth and settle a probably a 'B' rating. It is not good enough to stand up to some greats located across the Paso Square but it is not bad enough to be completely reemed. You be the judge...
Posted by Melissa Good Taste at 9:52 AM

Wow, we were just in Paso Robles yesterday, driving down from SF (where we attended a wedding) to return home to San Diego. My daughter wanted to go to the candy store a few doors down from this place. I really like the Brown Butter Cookie Company there too (the original location in Cayucos is quite nice as well).