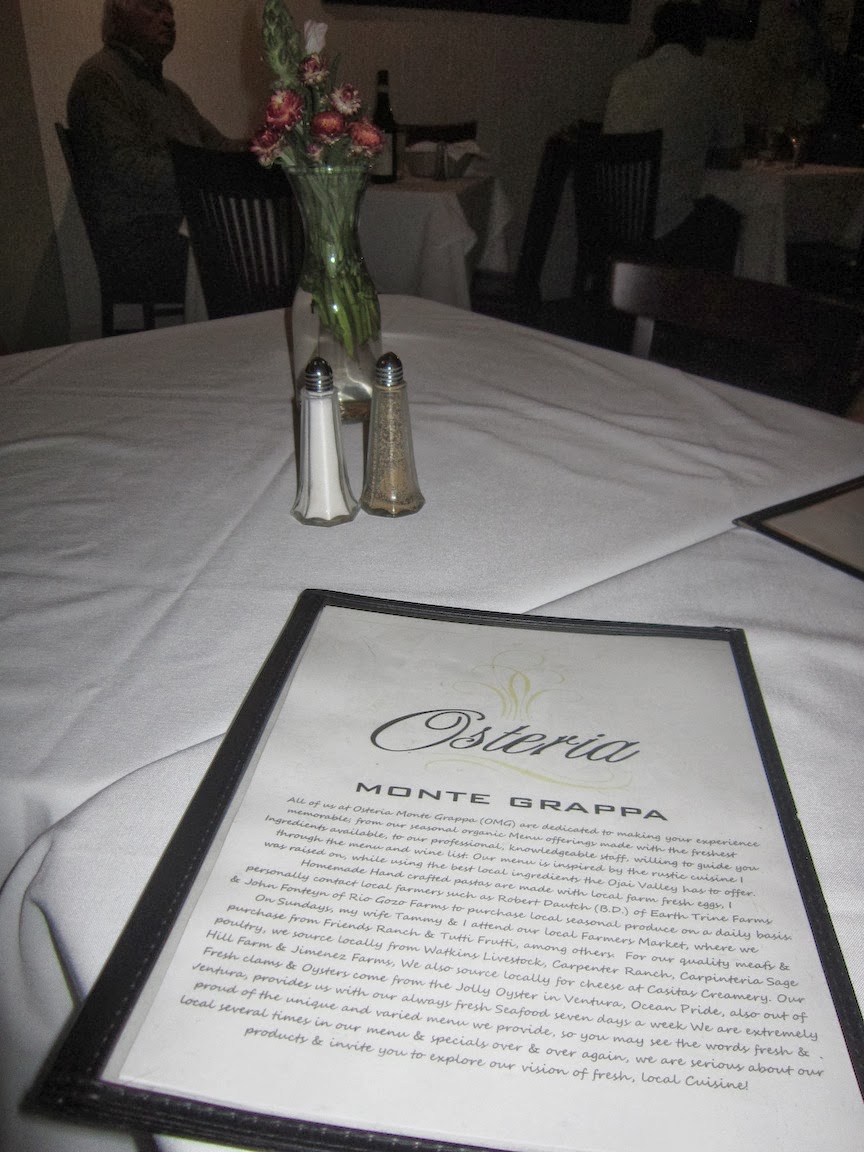 Scott and I had a whirlwind of a weekend entertaining my brother and his girlfriend, Kate. We had plans to meet them at the bottom of the hill to catch a nice dinner on their way to our house. In the arcade of downtown Ojai lies Osteria Monte Grappa, remodeled after a kitchen fire and looking beautiful as ever. 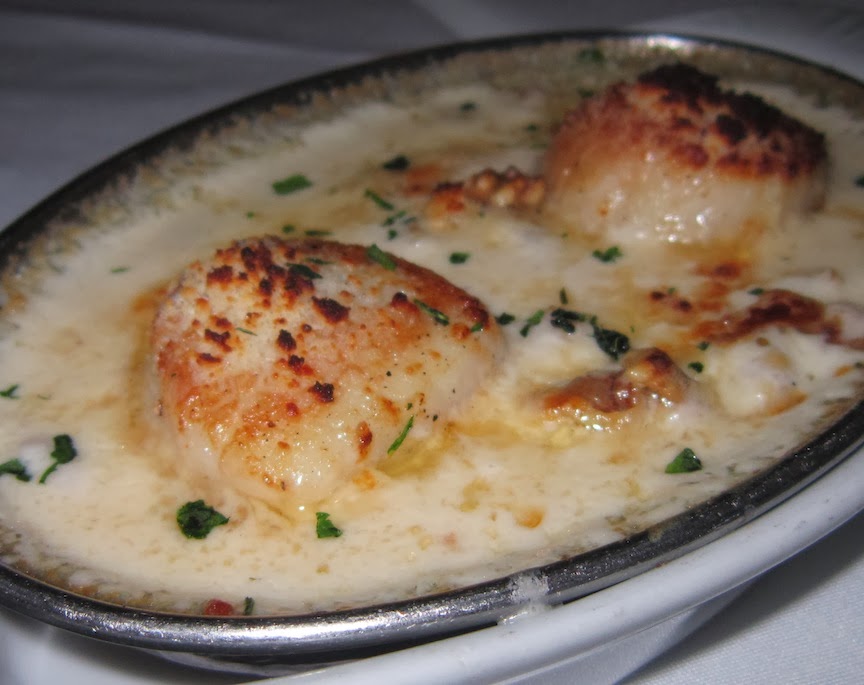 Scott and I arrived to the restaurant early to lock down a table so we ordered an appetizer to start. He let me do the picking, knowing full well I would pick the scallops. He doesn't like scallops but knows I love them so he eats them anyway. What a guy! 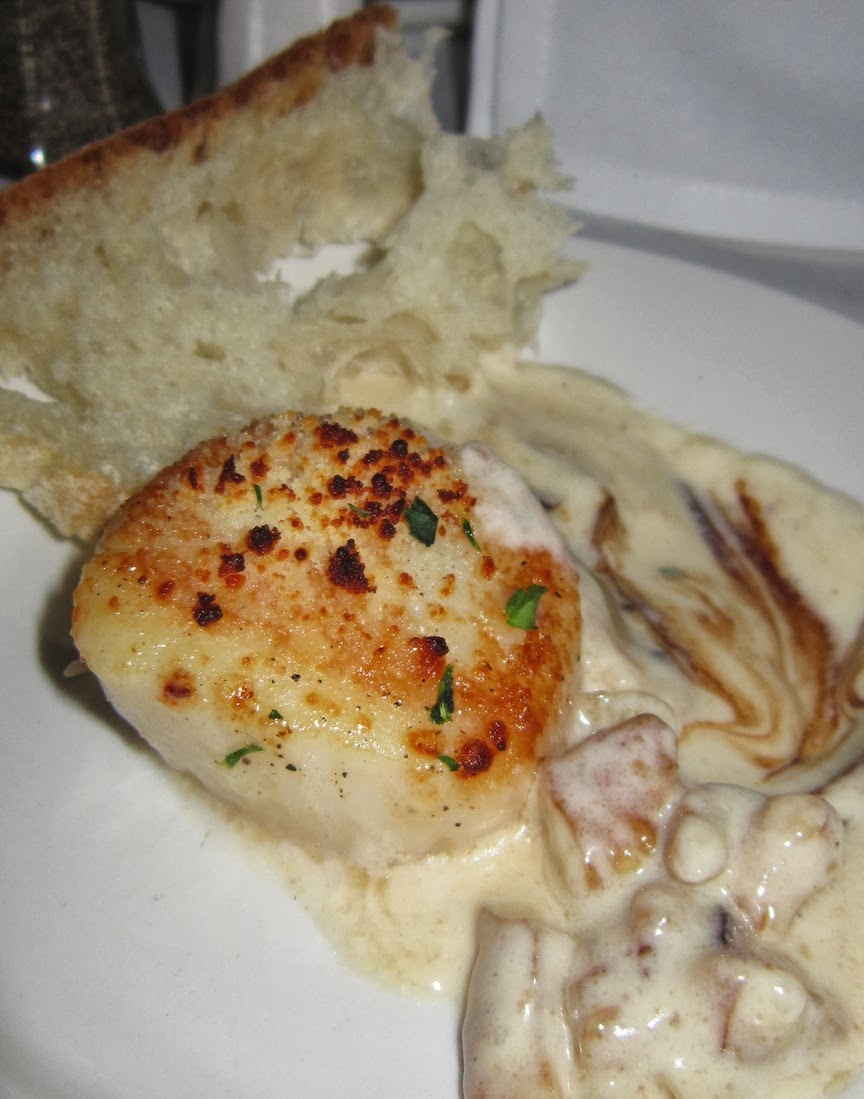 Loaded with cream, walnuts, and caramelized leeks, two scallops are meant to be shared between a couple. What you must do is also eat this dish with slices of bread. Sopping up the balsamic, mixed with bits of creamy and walnuts with each bite. Sinfully delicious. 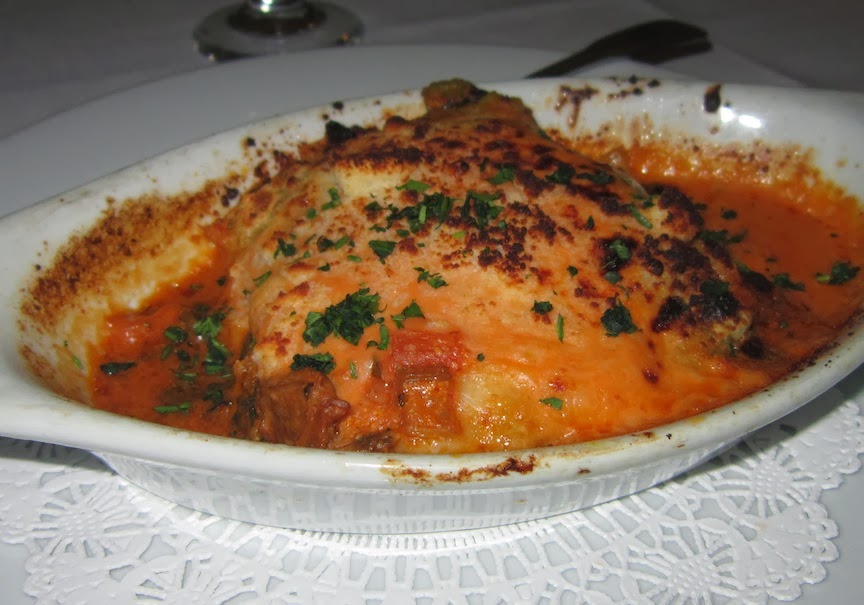 Our guests of honor arrived and we ordered our entrees... Scott's came first and it was the duck Lasagna. I was not shocked to hear him order this. He loves duck and likes to try new things. He liked it, it was a hearty portion. I tried a bite and thought it was ok. 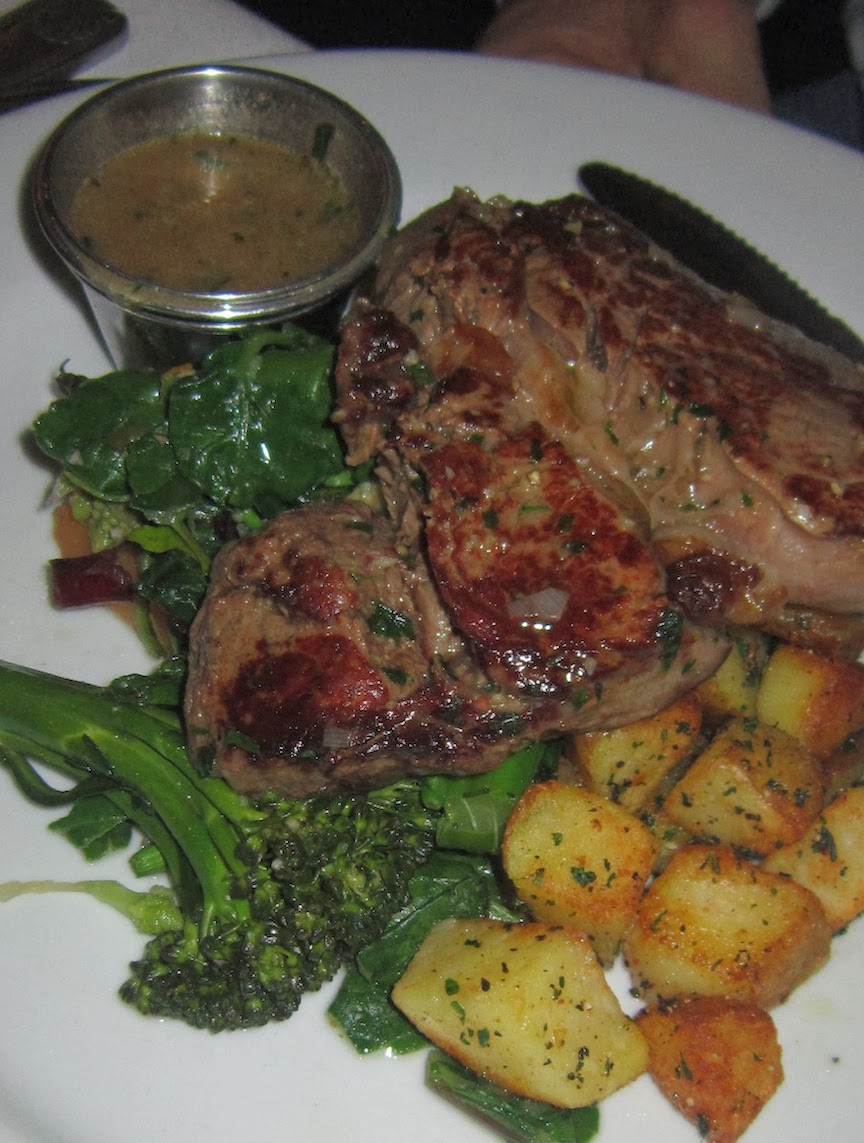 James ordered the steak and said it was very tender and a nice cut. I know all he really wanted to order was Chicken Parmesan so he was a good sport for being so congenial about my choice of restaurant. 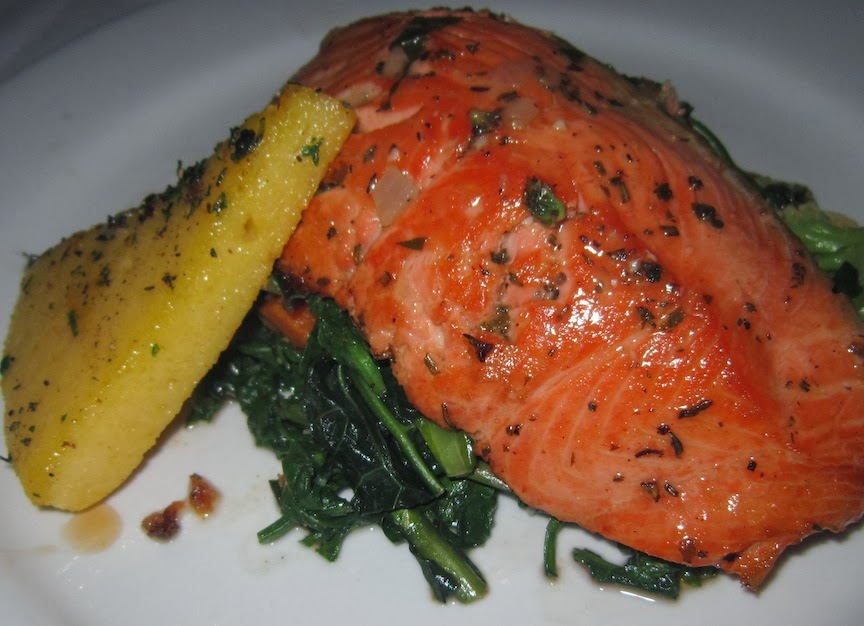 Next came out my Salmon, as well as well as one for Kate too. However, she ordered the chicken. So they whisked it back to the kitchen and whipped up a chicken breast. It was a little awkward and they did make it right in the end but it was a damper on their first meal in Ojai. As it was the salmon was not so tasty and sliver of polenta cake that they give you in embarrassing in comparison to the cost of the plate. 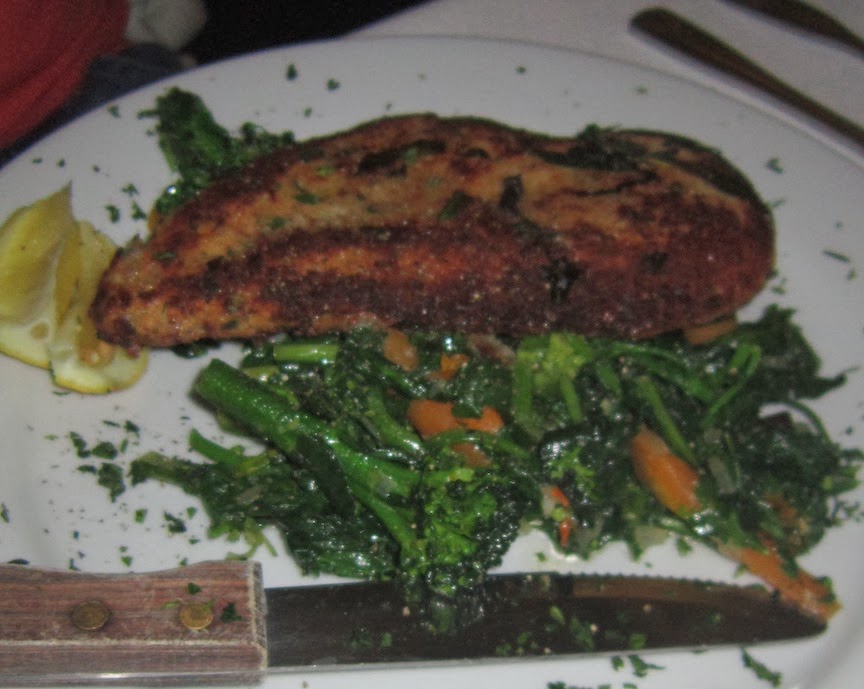 The chicken came to the table after the boys finished their meals, she insisted they ate so their food didn't get cold. Oh Osteria Monte Grappa... 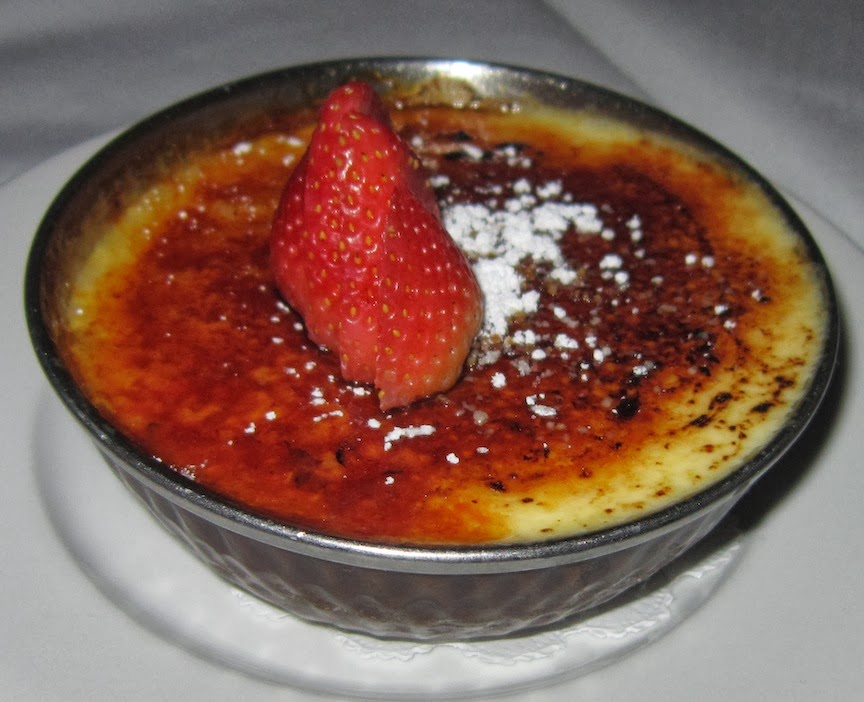 Desserts would make us leave on a happy note right? Oh yes, indeed. Scott ever the gentleman let me order my favorite the Creme Brulee to share and it was a little loose. I did not mind but the loose, eggy combination might have turned Scott off as he only had a bite. 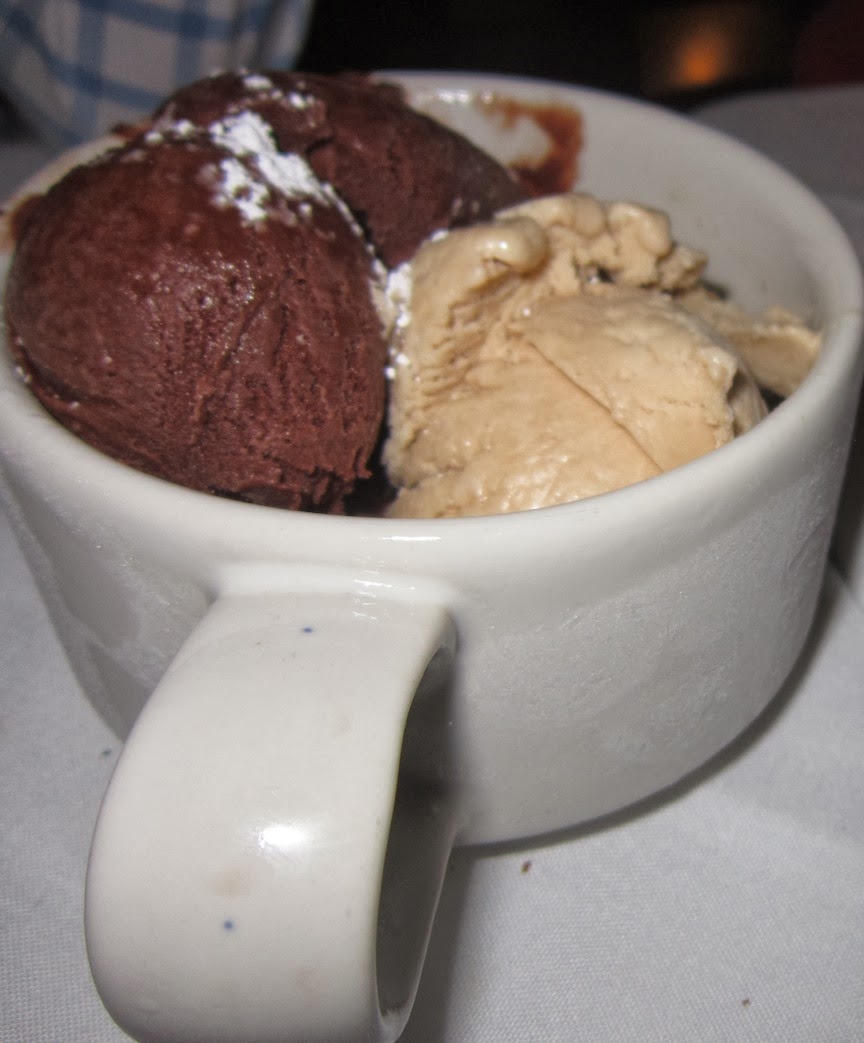 James and Kate shared a cup of the house made Dark Chocolate and Hazelnut Ice Creams. They both happily indulged as we savored the time we had together. It is not often I get to see my family anymore so we soaked in every moment.

I am so blessed.

Posted by Melissa Good Taste at 8:55 AM