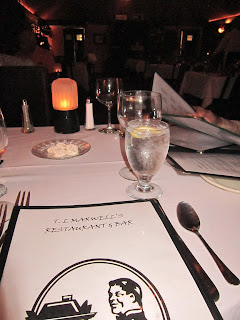 My husband has been bragging about the food he had at this restaurant, 15 years ago, for as long as I can remember. Apparently he went with friends and he still has dreams about the blue cheese steak he ordered. The restaurant is located in one of the oldest buildings in Bakersfield and its location in an alley makes it kind of a secret enterance. 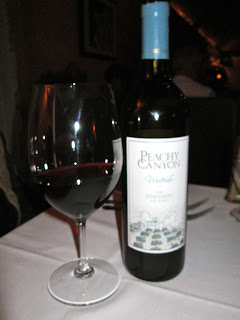 We started off perusing the wine menu and were not familiar with many so we took a chance with the Peachy Canyon Zinfandel and were pleasantly surprised. It was affordable and very good. 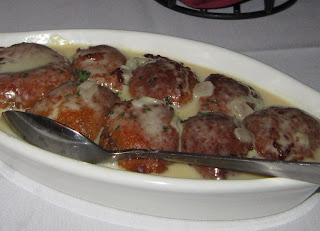 On the menu they said they offered "Famous Crab Cakes" and you know I am a sucker for them so I asked the waitress about it. She actually raved on the Stuffed Mushrooms so I went with her recommendation and we were thrilled. They were outstanding. 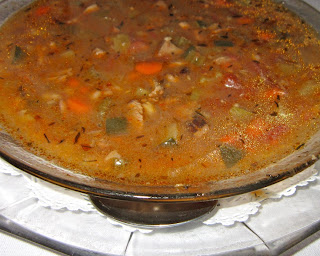 I had a bowl of the Beef Barley soup and it was amazing. The broth rich, and vegetables softly cooked. I thought this was just delightful. 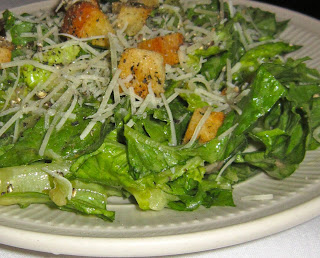 Scott and Cowboy Ron both had Caesar Salads and they both ate until the last leaf was gone. 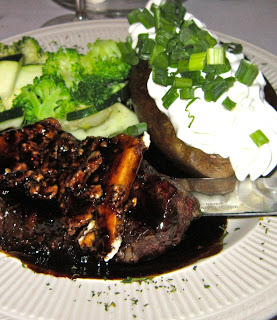 I ordered off the menu and had a Gorgonzola topped Filet Mignon. The meat was cooked to a perfect medium rare and the cheese seemed to be a nice addition. Bite by bite, I added a chunk of cheese to the beef and suddenly I was getting cheesed out. Maybe too much cheese for me. The baked potato was lovely and a good refuge from the cheese overload. 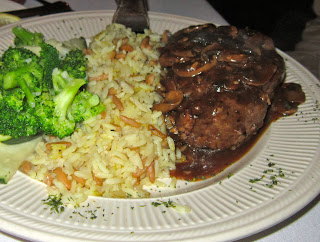 The boys ordered their steaks to be stuffed with blue cheese. They loved their meal but were soon waving the white flag from the heavy handed cheese. A little bit goes a long way! I did love the sauce that the steaks were topped with, it was so rich and savory.

I loved this restaurant because of the old school charm, our fantastic waitress and mostly because I was with the best company a girl could ever ask for. Thanks Scott and Cowboy Ron!

Posted by Melissa Good Taste at 9:24 AM