Santa Paula, the Citrus Capital of the World - also home to Familia Diaz Cafe. A family institution that has been around since 1936, that is 74 years of business - what an acomplishment! I have driven by and had Mexican food from here to go but have never actually ate inside. So I was pretty excited to stop in with Scott on the way up to the Ranch. 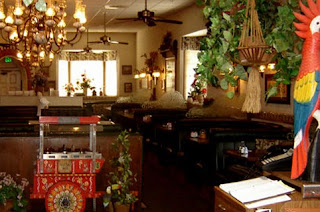 This is what the inside of the Cafe looks like. The parrots are a nice touch, kind of funks up the place. Did I mention that they have won the Best Food Award in 2006, 2007, 2008 by the LA Times. I am just sayin'... I missed the 5 type of salsa bar, I didn't even know they had one until I read about the restaurant afterwards, but it is the picture - see the little red wagon. We just had one type of salsa and it was pretty good. We ate through one basket of chips and decided to stop. Such control! 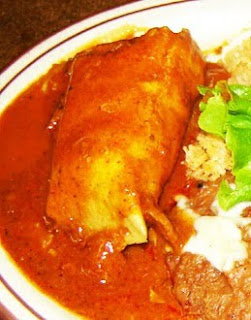 This was my order - just a shredded beef enchilada. It was pretty tasty. The meat was flavorful and the sauce was very rich. Tasted like they had it slow roasting on the oven all day long. I mean that like it is a good thing. What I also liked that it wasn't overwhelmed with too much cheese. I was pretty impressed when I asked for extra sauce and it actually came! With it's own serving bowl and spoon even! 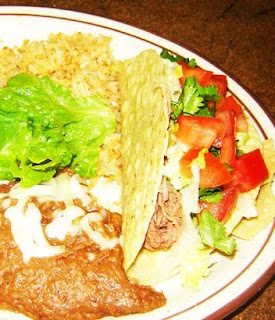 Scott ordered the Carnita's Tacos - however his were in the soft shell rather than the hard. The photos Familia Diaz had to offer me online were pretty slim! He seems to really enjoy the Carnitas Tacos here, I didn't try a bite but I am sure it was delish. Now let me tell you a story about pork. I tried to use the Crock pot and make my own version of Chile Verde, it all seemed to be coming out perfectly until I decided to hurry up the process. Start it early in the morning, don't try to blast it on high for 5 hours. What a disapointment! I know what I did wrong, I may try it again - I don't want the Crock pot to get the best of me!

All in all the meal was a success. Pretty inexpensive for food made with love. The restaurant wasn't too full for a Friday evening but they were quick and efficient getting our food out to us. The chips are good, salsa tasty (could be a touch spicier) and drinks served in a cold glass. I look forward to returning because my Chile Verde cook off made the house smell like a Mexican Restaurant and that was not a good thing. Even the next day, it was smelling pretty porky. Anyhow, Familia Diaz was an excellent choice.

Posted by Melissa Good Taste at 9:12 AM

You learned a valuable lesson - the "high" setting on the crock pot should not even exist. Foods that are recommended to be cooked on high are better cooked other ways.

I did learn my lesson that is for sure! I may attempt it again, maybe not... I think next time I might try a pot roast - medium rare beef is a lot better than pork! Yikes!!