Hello Baseball fans! While Scott, the horses and crew and I are at the Pacific Coast Cutting Horse Futurity in Paso Robles we are also cheering on our favorites, the San Francisco Giants. My Mom and I wanted to go out and celebrate a good first round for our futurity horses but Scott wanted to stay in and watch the first round of the World Series. So we called a truce and the ladies went out and he stayed in to watch the game. 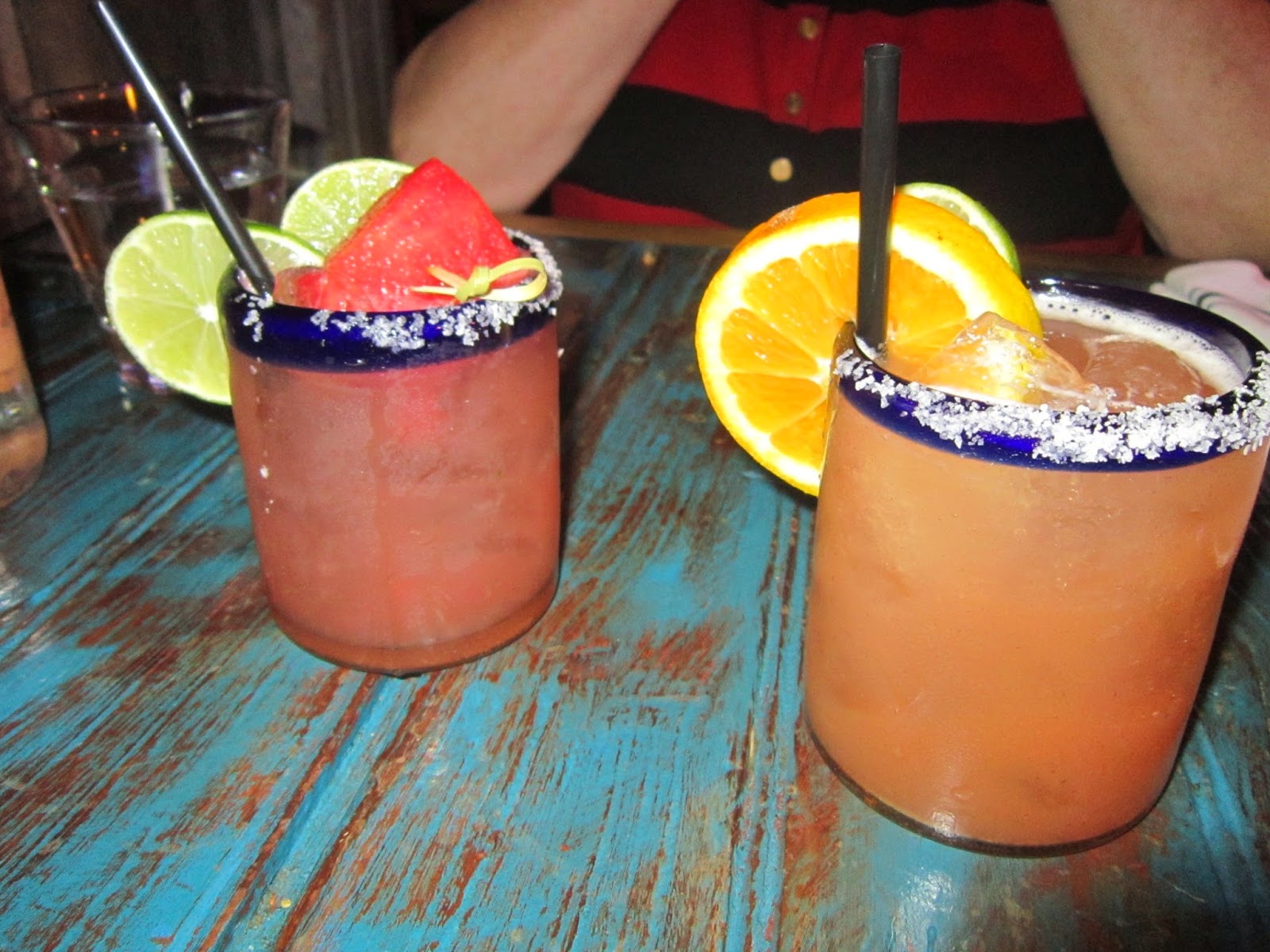 We decided to have dinner at a place we have never been before, Fish Gaucho. It is owned by a friend of our's son-in-law so we were anxious to give it a go after hearing many good reviews. To get our meal started night we decided to try their signature margaritas: Watermelon Mint and Blood Orange. They were both fabulous, totally worth giving a shot. the menu is described as California Mexican so I was muy muy excited to give it a try... 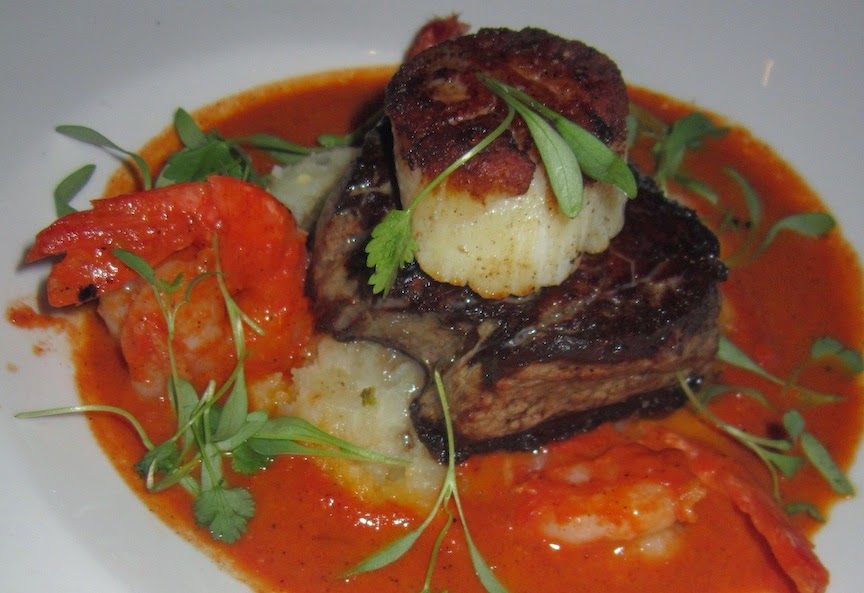 My mom went the surf and turf route and ordered the Filet, Shrimp and Scallop plate. The 6 oz filet was cooked to her desire of a perfect medium rare, two shrimp totally plump and scallop seared just like perfection. The proteins rested on a bed of jalapeno mashed potatoes and a warm ranchera salsa. She described it as "the best meal she has at a restaurant in a really long time..." 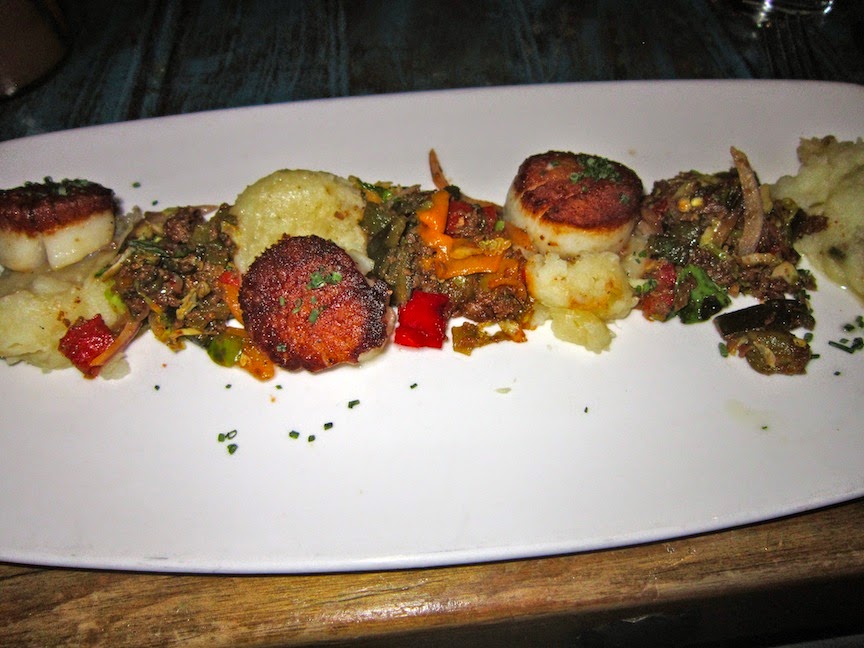 When I saw Scallops on the menu you know I could not pass it up. The Crusted Diver Scallops complete with chorizo brussel sprouts, poblano crema and mashed potatoes made my day. I literally licked the plate until it was totally clean. 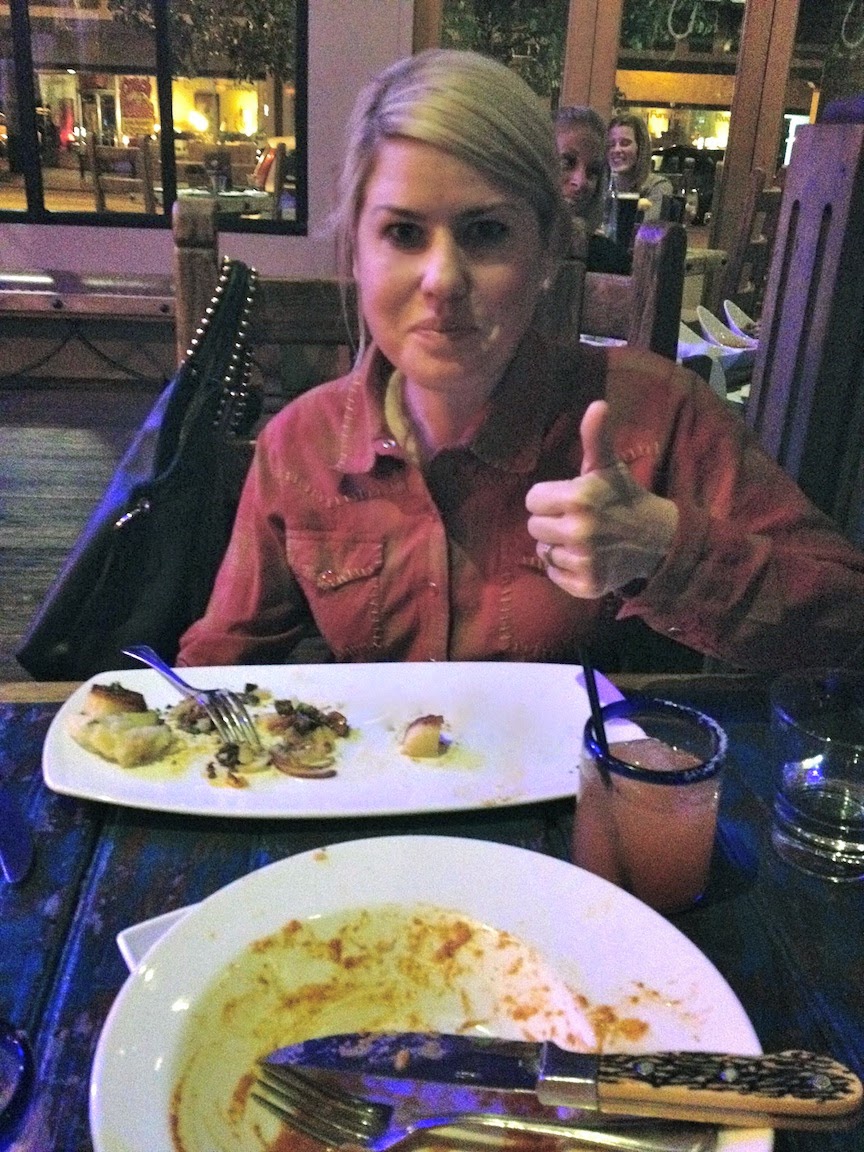 Our dinner was perfect. I rubbed it in to Scott so bad when I got home that he wanted to go for an early dinner today. This is how my second visit went... 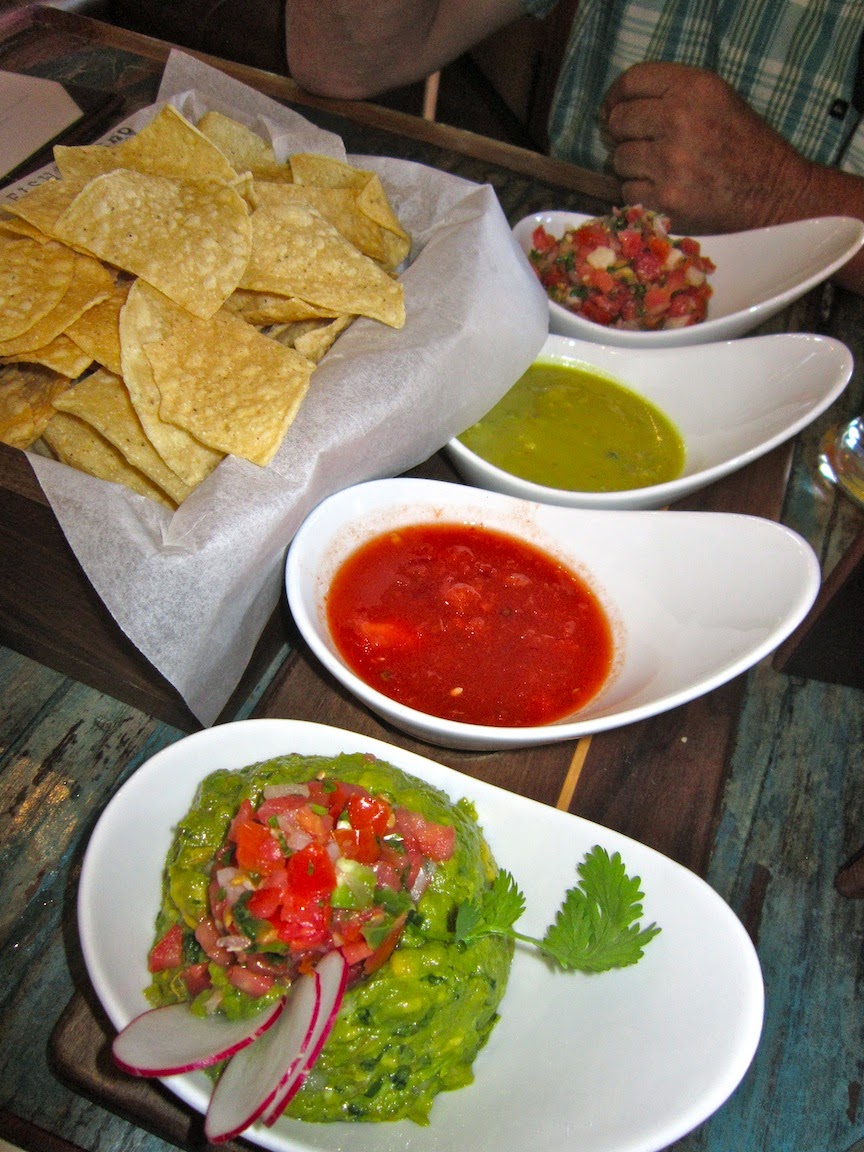 I knew I immediately wanted to try the chips, salsa and Morro Bay guacamole when I came on this visit so we put in our order fairly quickly. The pineapple pico de gallo was Scott's favorite, while i favored the watermelon chipotle. The guacamole was totally fine too. 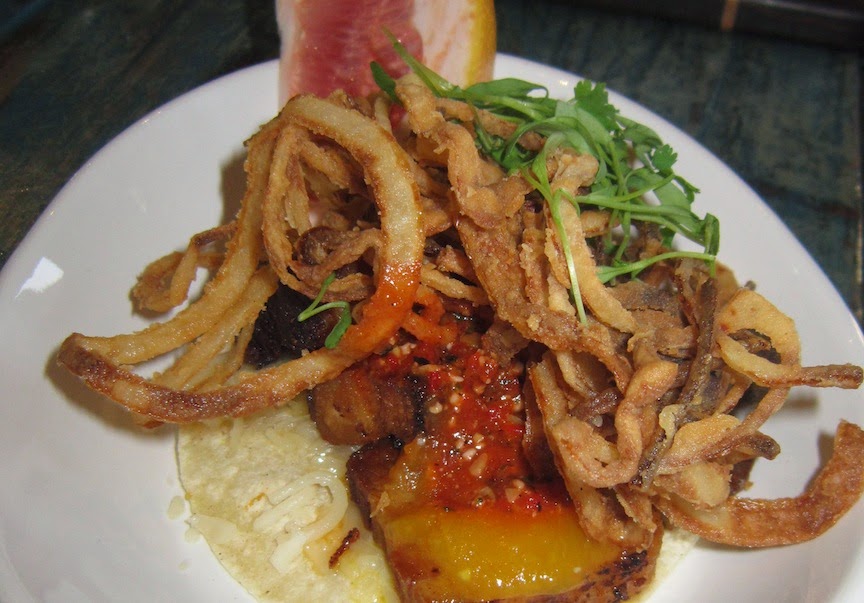 We were greeted with a gift from the chef (being a food blogger has its perks...) to kick off our meal. It was a pork belly taco, with crispy onion strings, spicy salsa and served with a slice of blood orange to squeeze over the corn tortilla blanket. I loved it. In fact, I was feeling quite full from all the chips and taco at this point. The taco will be featured on an upcoming menu and I felt pretty cool to get the inside bite. 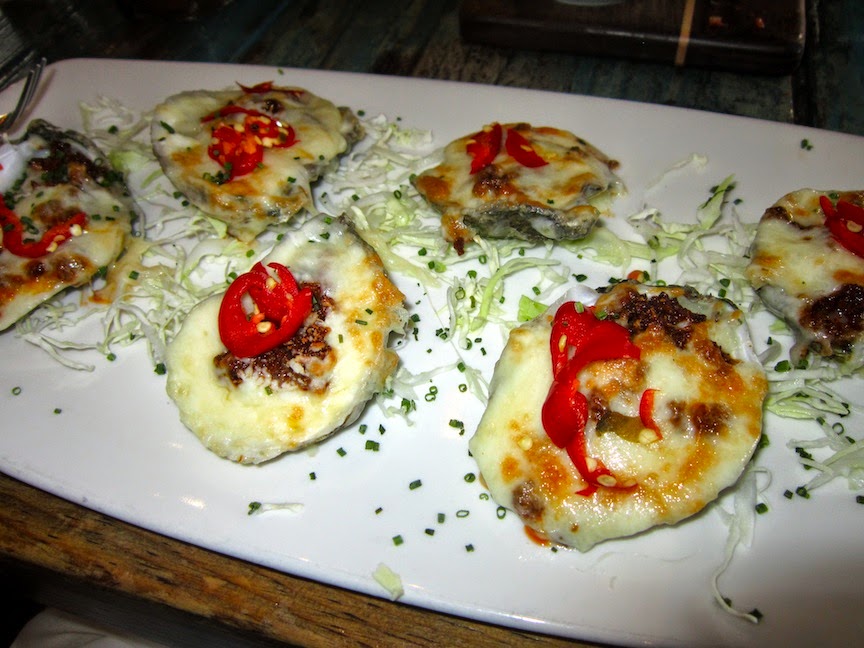 Feeling already pretty full, I decided to solider on with the Oysters Oaxaca. Six Blue Point Oysters topped with what they have described on their menu as chorizo and cotija crumbles. It actually was topped with a thick layer of thick cheese that took over the delicate taste of a baked oyster. I literally took off the layer of cheese before eating so tasting an oyster could be detected. I think these need to be switched up a bit. 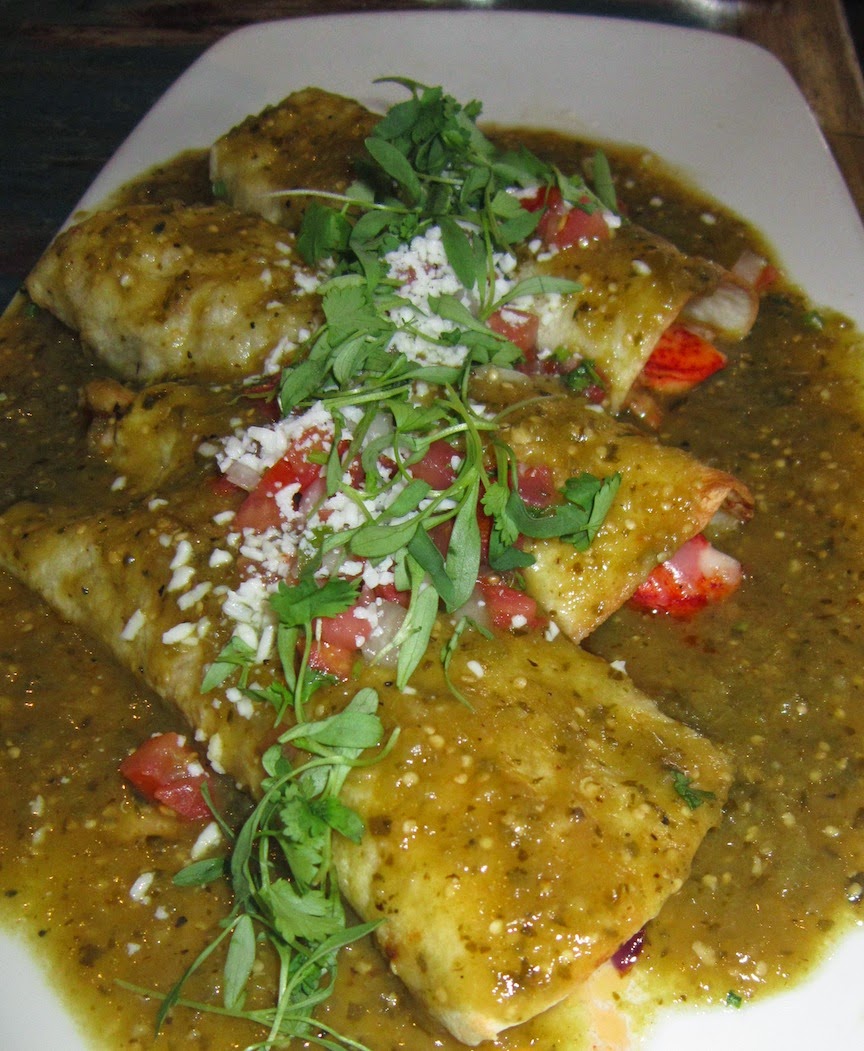 Scott is a Lobster Enchilada fan so when he saw it on the menu I knew he was old on it. Let me start off my saying, the portion size is huge! You get a lot of food. He noted that the lobster meat was only claw meat and would have been excited to get a piece of tail meat. He could only finish two but did enjoy the zesty tomatillo sauce.
As I explored the menu on my second visit it obviously was not quite as successful as the first but I do believe the third time will be a charm as we have to go again to let Cowboy Ron have a turn at bat!
Posted by Melissa Good Taste at 6:02 PM