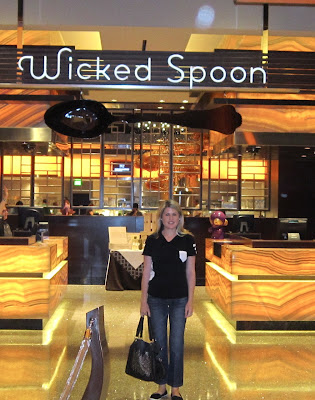 When you go to Las Vegas you have to go to a buffet at least once during your stay to sample all the goods. The Wicked Spoon at the Cosmopolitan is known for its chef driven food. More of  a "way we eat now" assortment of dishes with bold flavors, ethnic elements and unexpected combinations of ingredients. 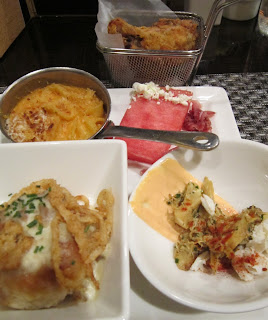 I would have preferred the evening session of foods but we were only around for the morning rush so I had to take what I was given. And that was plenty! Starting off at the top was a basket of fried chicken wings, they were hands down probably the best thing at the buffet. Working our way down clockwise, was a Watermelon and Feta Salad - delicious and refreshing. Next, a Crab and Artichoke Salad that was probably most forgettable items on my plate. Biscuits and Gravy was served in a deep dish and the white gravy was lovely. Up top was "Angry Mac and Cheese" and it certainly was a little furious! It had spice and it kicked up the flavor factor a few notches higher than normal. 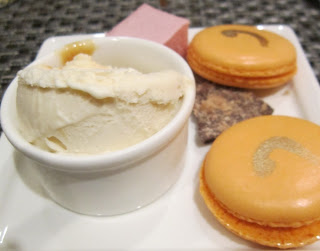 Even though it was only about ten in the morning we still needed to have some dessert. It would have been a shame to walk away without a nibble or two. The Salted Peanut Gelato, raspberry marshmallow and macarons were all I needed to cap off an excellent buffet experience.

I just read about the newest buffet to hit Las Vegas, opening its doors this September inside Caesar's Palace. The Bacchanal Buffet will be 25,000 feet long and house 600 guests. It sounds amazing and I cannot wait to give it a try! Viva Las Vegas indeed.
Posted by Melissa Good Taste at 3:40 PM

How much was it about? And do you know how much dinner would be?