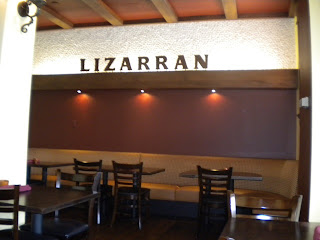 Do you remember the beautiful, old building that used to be the Gilroy City Hall at 7400 Monterey Street? It was also home to Chips and Salsa, a Mexican restaurant. Well, it didn't last and it is now Lizarran, a Spanish tapas restaurant. It sounded like fun so my mom and friend, Susan went on over to give it a go! 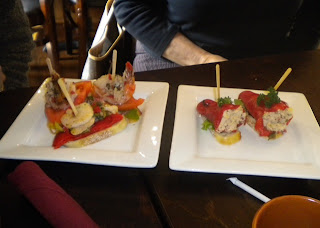 What is interesting about the restaurant is that they have a "Tapas Bar" with pre-made items. You pick and choose out of a glass display. So, we did this to kick off the meal. You keep the toothpicks and put them into a ceramic dish - that is how you are charged at the end of meal - number of toothpicks. Kind of fun! Basically these are bites of shrimp, maybe a tuna mixture, peppers and tomato on slices of bread. They all were different but sort of had the same taste. I think the idea of the "Tapas Bar" is fun but we decided to continue on with ordering of the menu. 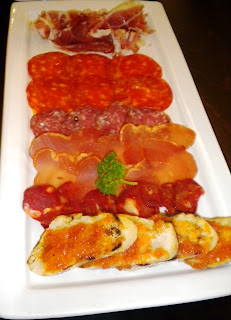 I know that this was the Tabla de Embutidos - which is an assortment of traditional Spanish cured meats. Tasty. Meat is good but we didn't order anything to go with it like cheese and they only served it with 4 slices of bread. So we just munched on the meat, which became old. I think we took the rest to go just because we were bored with it. 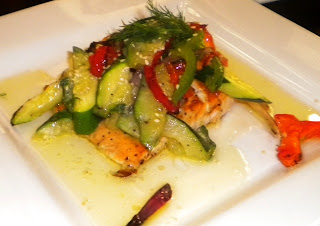 This is the Salmon a la Plancha which was basically grilled salmon served with sauteed bell peppers and onions. It was tasty, cooked well. Probably the best dish we were served that day. 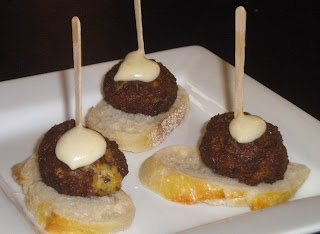 Cute little crab cakes! They were very tasty, I ditched the bread they were resting on though, no need for the extra carbs! 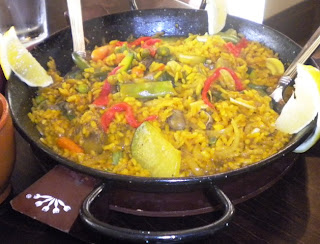 This is the Paella de la Huerta which is saffron rice with vegetables. It was pretty good. It took a little while for them too cook but we just took our time visiting. I probably wouldn't order this variety again though, there was a seafood version that might be worth trying.

I did some research on this place after I had visited it, it is part of a chain and has locations located in Southern California. I would have never known! It is in such a beautiful building with the most precious courtyard, it is hard not to be happy while your there. I suggest you try it when your not too hungry and want to have a leisurely visit with a good friend over a couple glasses of wine. Stay a while, munch on some tapas - I was trying to imagine myself being on vacation while in Spain! Ha! Give it and a go and let me know!

Posted by Melissa Good Taste at 10:13 AM

Wait a second - is the place busy? The idea of pre-made seafood tapas that might have been sitting out for hours is about one step above "discount sushi." - Justin

It really wasn't busy. I didn't get sick but, it probably could have happened. I risk my life for food blogging! Ha!

You suffer for your art. I respect that. (You've seen some of the junk that I eat.)

Funny comment thread -- You suffer for your art, ha. I was admiring the colorful photos. I've only passed through Gilroy once about 20years ago and picked up some garlic, of course :) Ciao.

i <3 tapas, but agree that they're only good when you're not going to a restaurant expecting to leave really full! i always have to stop off for more food afterward! :)

Hmmm, a tapas place in Gilroy? Is it worthy of a detour on the way, say to Monterey? Planning a trip down soon, and was very sad to hear my favorite Tepa Sahuayo closed in Watsonville, my go to break the long drive pitstop... Anyways, looks good. Was it pricey?

I've been in Gilroy for the festival and competition, but I'm posting to let you know how much I like your photos and the way you've structured your blog. Have a great day. Mary

I've been to Lizarran in Fullerton, CA. I had the Paella with the squid ink that turned the rice black. Didn't look very appetizing but I found it quite delightful. Actually, I found that it didn't taste much different from the regular Paella. Oh well :) Great blog! I'll have to star following you!