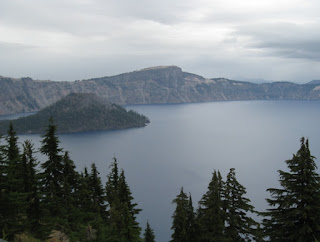 Crater Lake is a caldera (crater cause by a volcanic eruption) lake located in the U.S. state of Oregon. It is the main feature of Crater Lake National Park and famous for its deep blue color and water clarity. The lake partly fills a nearly 1,958 foot deep caldera that was formed around 7,700 BC by the collapse of the volcano Mount Mazama.

Why am I letting you know this? Well, because I just learned those interesting facts while in Oregon at the Mebane Ranch Aged Event Cutting. My mom and I were having a lovely time hanging out at the cutting ALL day long but we needed to celebrate - I had just made the Finals in the Amateur Derby. Yay! 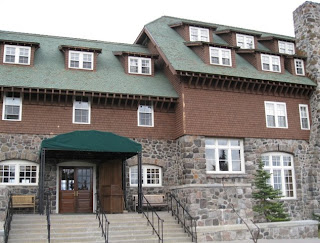 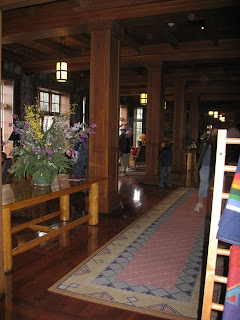 And, here we are at the Crater Lake Lodge - a monstrosity of a place. Rock and logs seem to decorate every inch of the Lodge. Very rustic and quite manly, I liked it. 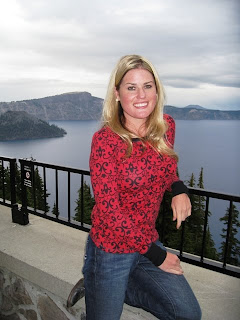 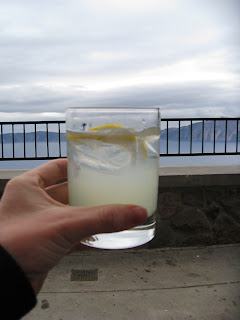 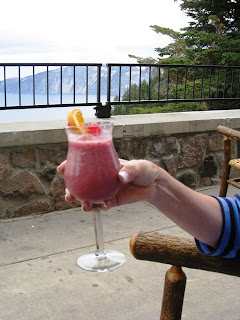 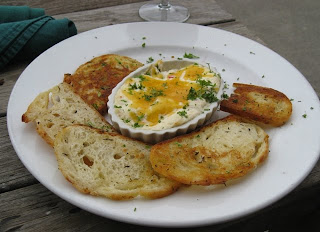 So that is a very burnt me posing in front of the Crater on the deck of the Lodge. We were waiting for our reservation so we killed some time with some cocktails and an appetizer. I had a pretty usual concoction of Absolute and Lemonade and my mom had a Mountain Colada - basically a Pina Colada with berries mixed in. We both found them to be quite refreshing. We were just starving so we had an appetizer delivered to us while we waited. We decided on the Oregon Crab and Artichoke Melt with melted Tillamook cheddar, served with thyme infused crustinis. Not quite as much crab as I wished but, very good all the same. 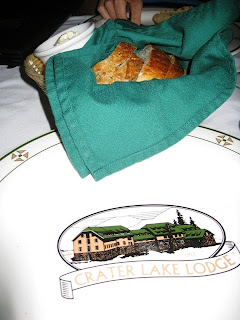 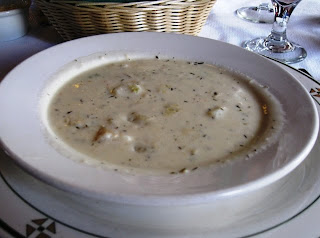 We browsed over the menu until we both said, "I just kind of want soup!" It had rained during the cutting that day so we both were seeking something comforting. A bread basket full of rye bread and a hot bowl of clam chowder sounded perfect. The chowder was ok. Not the best, too many large chunks of potatoes - cut those babies up please! I still ate until my bowl was clean though... couldn't have been that bad right? 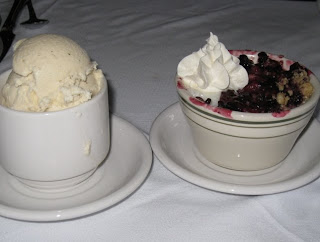 The dessert - Berry Cobbler with Vanilla Ice Cream on the side. Mehh... Not impressed. Just tasted like pie filling. Nothing else to say, isn't that awful that I have nothing nice to say about dessert?!

All in all the Lodge was a great place for us to visit during my week long stay at the cutting in Fort Klamath - which is 23 miles from the Crater. A $10 admission gets you into the park to sight see Oregon's only National Park, quite worth it. The food is ok, but it is sitting on the deck with a cocktail in hand is what was truly delightful. I will return during my next cutting adventures I am sure. 1.33 thumbs up.

**So I made the Finals and ended up Reserve Champion. Yay! Pictures to follow...**

Congrats on the Finals. This is the first year in the last 5 that I haven't been able to make it up to Oregon. I already wanted to get back, but now I really do.