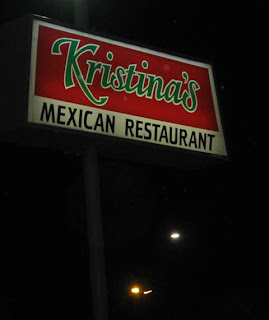 I needed to do a food review, I have been letting my loyal readers down! So on Sunday evening I decided to give Kristina's a try. Located at 480 Tres Pinos Road and directly across the street from Taco Bell is where you can find this Mexican joint. They are known for their lunch specials but I decided to go ahead and give it a whirl for dinner. 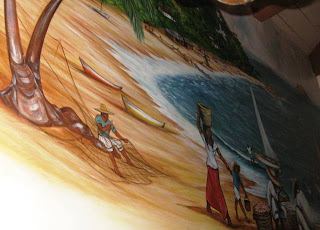 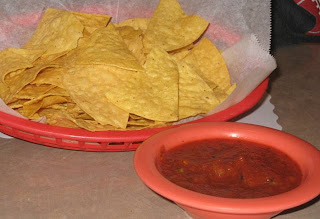 As you walk in you are instantly greeted by the friendly staff. I believe there were three ladies all busily working but the second we walked in they stopped what they were doing to welcome us. The place was not very busy, it was raining pretty hard out so in their defense people could have been hiding in their homes instead of dining out. As we made our way into a booth I noticed the interesting mural on the wall, I love murals! I always stare at them until I find Waldo. But, unfortunately I couldn't find him in this one. Darn it. Chips and salsa came, it was alright. The chips were fresh out of a bag and the salsa, I do not believe was made in house. No worries though. 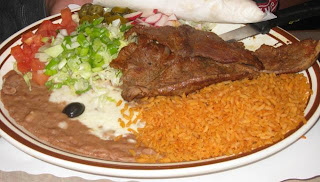 First up was my order of a cheese enchilada smothered in green sauce rather than red. I asked for extra sauce but I am not sure if it had that. I liked that the rice had some color to it. It did not taste like regular Mexican rice, it was long grain and little al dente. Which was strange, I just report the facts. The beans were just alright, nothing special. I was most disappointed with the green sauce on my enchilada. No taste! It was just sauce, making my enchilada wet. That's all. Bummer dude. Next up was the Carne Asada plate. From the picture it looks pretty impressive and it seemed not to disappoint. The rice and beans got the same review I gave. Just okay. The meat itself was pretty good, it is usually difficult to screw up carne asada. The side components were a nice addition to the plate... radishes, jalapenos, tomatoes and green onions.

All in all, I would say Kristina's is pretty average. Nothing that made me say, "Wow, I want to go there again" - but not terrible. I know people who really enjoy eating there for lunch because of their awesome lunch specials. For $5.95 you get a lot of food and a drink. Not a bad deal at all. So if you are in a hurry or short on cash I would go back to Kristina's. 1.25 thumbs up.

Posted by Melissa Good Taste at 8:53 AM

Don't you hate it when Mexi restaurants use shredded lettuce as a garnish? It always gets mixed in with the beans and rice and heated up lettuce is asstastic to eat.

You didn't respond to my comments in your other post. Have you ever been to Jocko's steak house? You will love love love it.