While driving through Morgan Hill on Saturday I stumbled across Fuzia Restaurant. I was intrigued by the sleek facade. I parked the Yukon and wandered in for a late lunch at the 17340 Monterey Road location. 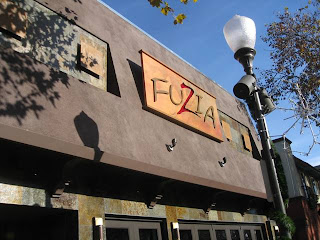 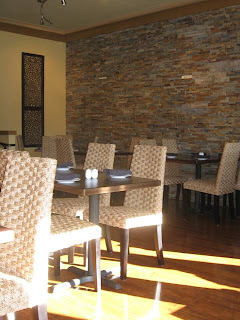 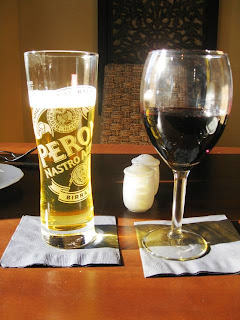 As we walked in we were greeted by a hostess who seemed to be learning her way around. I overheard talk of this being a newly opened restaurant. Exciting! A fresh place for me to review! Yahoo. We were seated in front on the window that faced the street, a great spot to soak in the afternoon sun. The wine menu featured AliCats Syrah from Hollister, so you know I had to order that. I love AliCats. They currently have only their beer and wine license so a Peroni was ordered as well. 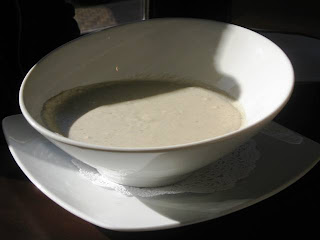 The waiter came by and told us that the soup of the day was Cream of Celery Root. It sounded weird, so of course I ordered it. And, I am sure glad I did! That soup was delicious! Who knew celery root was so good? I mean really?! The only complaint I had was the size of the bowl, I kind of only wanted a cup... creamy soups are so filling. 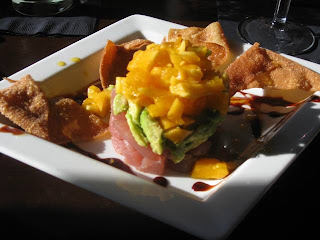 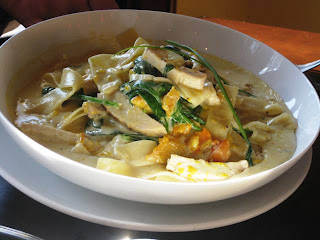 The entrees came up next and they sure were beautiful. I ordered the "Tower of Ahi" which was served avocados and papaya, then drizzled with a pomegranate-orange sauce. It was served with four delightfully crisp wontons, my favorite part. I was kind of underwhelmed by this dish as a whole. The tuna was just tuna. Nothing tasted bad, just one note. The next entree up was the Pappadelle Pasta - chicken, butternut squash, spinach, shallots bathed in a sage cream sauce. Wow. This serving was huge! The dish was a cream fest. Too rich! After all that Cream of Celery Soup and then this heavy pasta we were just creamed out.

There are only a few things that make me angry when I go to a restaurant. One of those things is when the hostess/waitress is rude to the fellow workers, in this case the bus boy. It is just disturbing. I felt like saying something to her, I will get the guts someday to speak up. She really turned my stomach. Between all that cream and the not so nice girl, I was ready to scram. I enjoyed the new, beautiful setting but when I saw that my bill was $63 for lunch I freaked. Time to go, and time to go now! Wow. bring your pocket book if you want to try this place out for yourselves. 1.25 thumbs up.

Hey there, thanks for swinging by my place and welcome to my circle! I really like what you are doing here verra, verra nice...

Next time I am out in your state I will definitely call upon your good referrals!

Merry Christmas from the Hill Country of Texas!

This is the post that made "Sam" mad? weird! - After reading all morning I find you to be a very fair and compassionate person.

I worked in restaurants for years [hs/college] and Sam was out of line - the hostess should be reprimanded. There is a heiarchy in a restaurant environment, but nothing that allows for her treatment of the busboy. Just wrong.

[PS - just wanted to put my two cents in - you certainly do not have to post this or any of my other comments - I am just having the best time reading your blog :D]

Nonday 8/31 dinner for three. Place is nice, service was good, wine list was good. Calamari fritti were very good...tender and done just right. Mixed Geen salad was nice too. Two ordered sole ...was very salty and didn't think the fish was very fresh. One ordered pork loin and it was so tough had a dificult time cutting it. May have been frozen and nuked ...then cooked to a shoe lether consistancy. I was very dissapointed with the main enreee food quality.