Shopping all day at Valley Fair can really wear a girl out! We needed something to fill our tummies and something interesting, something never been to before... Roux Louisiana Kitchen on Santana Row? Sure, why not? Sounds perfect! 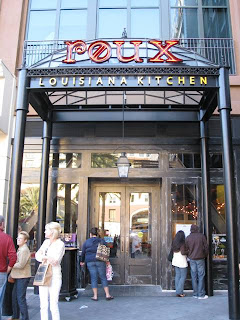 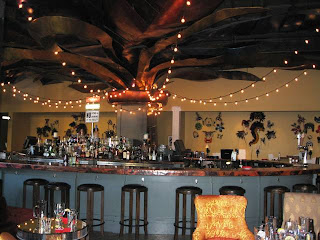 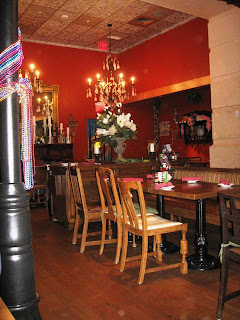 Elaborate feathered masks and gilded capes covering walls, strings of beads hanging around waiters' necks, and rum-laced Hurricanes served in outsized goblets: Roux Louisiana Kitchen declares its enthusiasm for all things New Orleans from the moment you walk through the door. The dining room, tucked off to one side and almost hidden behind a row of faux lamp posts, feels like an afterthought, despite its exuberant decor. On the menu, drinks outnumber dishes by nearly two to one and include mint juleps and absinthe along with Bourbon Street specialties such as the Hurricanes. Martinis and mojitos come in a variety of flavors. 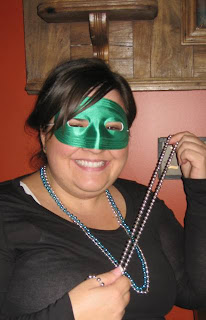 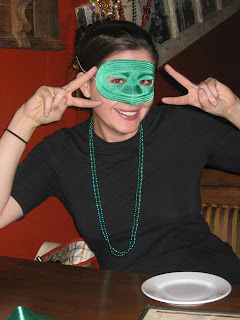 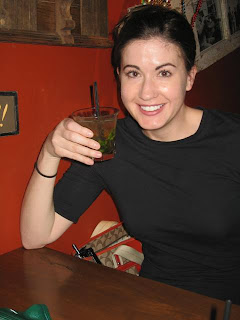 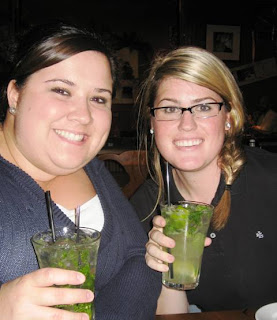 So we joined in the fun! Jennifer ordered the Mint Julep. Strong! Wow. That girl can hold her own. Amanda and I are a little bit more conservative and order the mojito. Hers the "Coconut Vanilla" and mine the "Standard" - both were fabulous! Very refreshing. 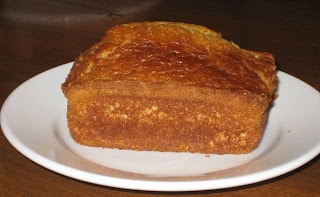 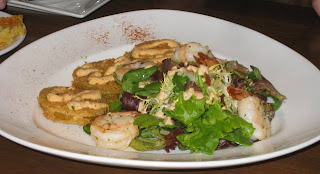 I took the hot cornbread and honey butter delivered right after the menu as a sign that Roux was on the right track. The mini loaves of cornbread were dense but not too heavy, with a nice chewy texture and a hint of sugar. We ordered the Fried Green Tomatoes as an appetizer and were disappointed to see there were only 3, I mean there were 4 of us! They told us for $2 extra dollars they would bring us an extra slice of tomato... um, no thanks. That was kind of weird. Oh well, onward! 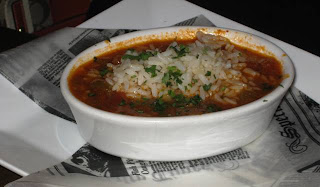 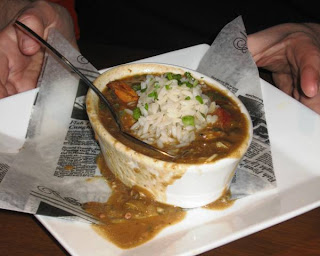 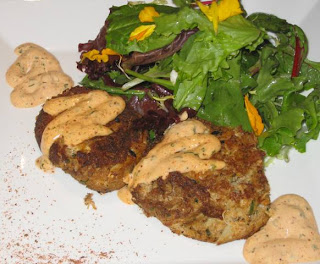 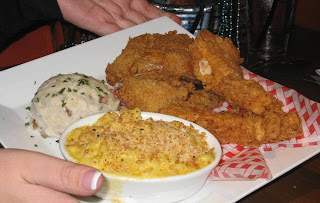 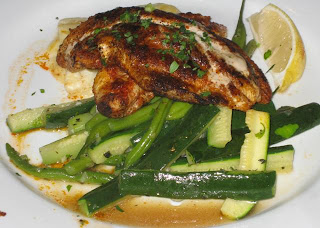 Jennifer ordered two types of soup and starts off our entree trail... The first is the Crawfish Etouffe, which is crawfish tails, tomato, peppers, onion and celery. Next is the Gumbo, shrimp, oysters crabmeat, andouille sausage and okra. Both served over rice. She said both were ok, the later tasting sort of like dirt. I think she was being nice - don't you think? ;) Mine is next... and take a guess -- CRAB CAKES! I feel like Homer Simpson... except he likes donuts and I love crab cakes! The large cakes were terrific, more sweet crab than filler and pleasingly crisp on the edges. Roasted red pepper aioli and a generous salad of very fresh mixed greens filled out the dish. Next was Elena's Buttermilk and Abita Beer Battered Fried Chicken - say that 10 times fast! The chicken was out of this world good! Thick, crunchy skin and the chicken tender... Elena substituted the cole slaw for Mac and Cheese and it was not your usual, it had a crunchy crust and made with the good stuff! Real cheese and a lot of butter! Yum. Amanda ordered the Blackened Catfish and was not so impressed. The fish was slightly mushy and the sauce was pretty spicy. Even for me, and I love spice! Potato Au Gratin and vegetables also rounded the dish, they both were ok.

Our server was remarkably enthusiastic but disappeared for long stretches. I think they were understaffed though, poor guy. The manager should have stepped in to fill the gaps, making sure water glasses were refilled, new drinks delivered and dishes cleared between courses. But instead he walked around aimlessly, providing no help to the restaurant's success. Our bill came and we split the bill in quarters. They handled the task of 4 ATM cards quite seamlessly. That was nice. I could really see myself returning to this place! Not necessarily for the food but for the drinks! The drink menu was fun! Lots of cool drinks to try. The setting is wonderful. They have a mask themed event on October 31 - anyone interested in going? 1.75 thumbs up!

Roux was a great restaurant. I agree on the analysis of the managemt though, total happy-kill. Great job loser, make your customers uncomfotable. Good pictures though Melissa!