Good morning San Juan Bautista! That is how my brother, sister, my sister's friend - John and I felt this morning... so we decided to pay the Mission Cafe, located at 300 3rd Street, a visit. Not your traditional Mexican food restaurant, yet a happy little cafe who likes to serve the traditional breakfast and egg kind of breakfast and so much more! Read on... 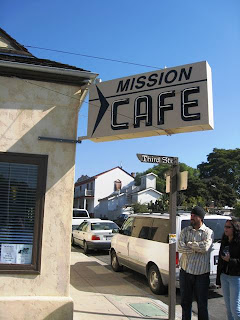 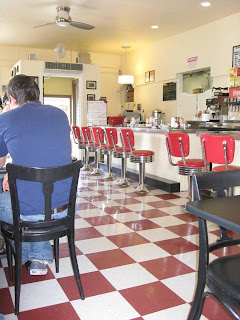 The Mission Cafe in San Juan Bautista is again open for business. This time last year it was closed and forlorn but in March 2008 it reopened. Now it has a new lease of life. Inside it looks almost the same. The stools at the counter are new as is the bar but the layout is identical. It is not a large diner but it’s compact. In the front window is a large table for 6. Along the side are 4 four-seater booths. In the middle are 4 small tables for 2 and there are ten places at the counter.Decorating the walls are lots of old photographs, some of San Juan Bautista views and a few portraits. There are a few other knick knacks on the window sills. 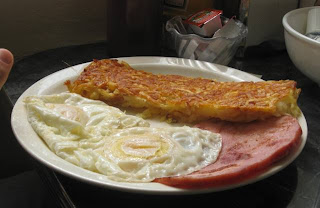 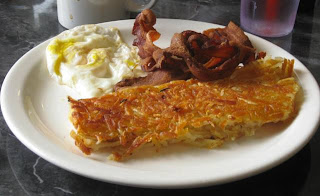 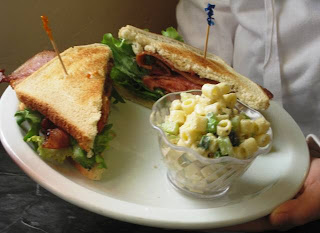 On with the food. The first photo is the "Eiffel Tower" and John's choice. It is french toast and eggs, bacon and hash browns. Lots of food! He said he loved it. Next was James' order of eggs, hash browns and ham. He ate the whole thing so I am sure he also enjoyed it. Mine is third and looks quite similar to the last two photos... we must all have great taste! I ordered my bacon and hash browns extra crispy. Cooked to perfection! Jennifer was last and she went with lunch fare. A BLT and macaroni salad. She said it was really tasty, in fact, she wanted to be quoted saying, "They have really good bacon, it tastes really good." Enough said.

I couldn't believe how packed this place was, SJB is happening! I was happy to see the little cafe busy. The waitstaff was very friendly and accommodating. The food was served quickly and the price was extremely fair. I am very impressed with this little corner cafe! Two thumbs up all the way. Go to the 95045 and check it out!
Posted by Melissa Good Taste at 8:08 PM

They chaged their menu recently and the staff, I still go there but it isn't the same or quite as good. And out waitress had a giant hickey! Haha, we commented on it and she claimed she didn't know what it was... then came back and said she had left the window open and a mosquito bit her. Sooo funny!