Since we were in town for the evening from the Customer Appreciation Days - Pete, Don, Theresa and I made plans to go to dinner together. We decided on John D's, a steak house in Lemoore, that recently changed ownership. The building was always a steakhouse so we challenged JD to bring it on! 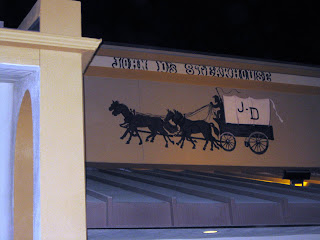 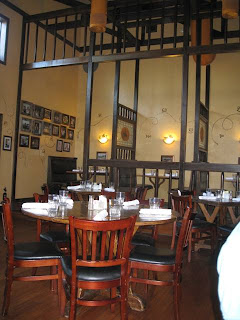 The inside was very cute. I liked the western decor - they really have a great layout too. There was a step down bar in the front (not pictured) and a wrap around outdoor patio (also not pictured) that I could envision many parties being held.
Onward! 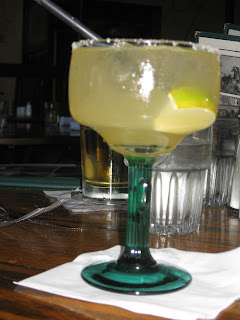 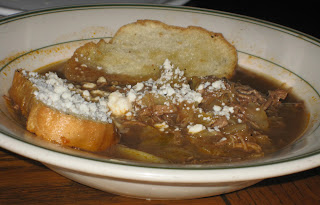 I was a slacker with the photos so let me re-cap you. Maybe because I was with a new crowd, and taking pictures of everyone's food/drinks was a little awkward? I don't know, I am a sissy. Anyhow, I had a margarita, and this sucker was stout! I would go on to say maybe, the most potent drink I have had in a long time. I waited for the ice cubes to melt so it was drinkable! Pete had a beer, Theresa had ice tea and Don had a crown and coke. I ordered a salad with ranch but it was forgettable so I will spare you the blag photograph. However, Don ordered Portuguese soupas. This is a traditional Portuguese soup simmered for many hours, made with beef and all sorts of other spices. The one time I do not order the soup! Argggggggggghhhh! Don said it was great. Darn it. 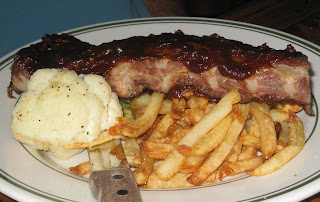 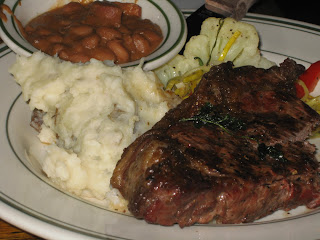 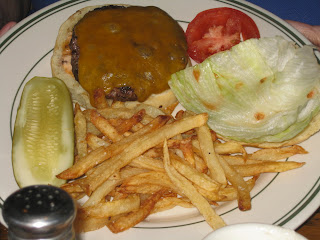 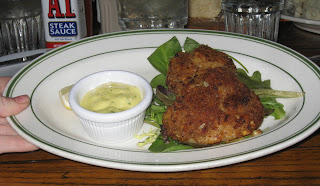 So the top photo is Pete's - he ordered the ribs. There was a lot of food, which is not a complaint. He enjoyed the sweet and sour of the bbq sauce spread across the ribs. Tangy! I tried one of his fries and they were not poisonous! Mission accomplished, I saved the day. Don ordered the rib-eye. One of the pricier steaks on the menu, it seemed to please Don. Cooked to perfection and easy on my eye. Couldn't say a bad thing about that one. Next up, Theresa. She ordered a cheeseburger - it was said to not have been bad, but maybe a little expensive for what it was. And last but not least, mine! I ordered the CRAB CAKES! I love crab cakes. How does one screw up a crab cake, well, by dousing it in too much salt - that is how! I do love me some sodium chloride, but this just took the cake, the crab cake!

All in all, John D's is a fine looking establishment. The wine selection was nice, the ambiance was fantastic and the service was meh. If I had to go back to Lemoore I wouldn't be opposed to this place, but I might want to venture out and try something new. I did like the fact that they let us sit and chat for a couple hours without trying to push us out the door. That was nice. I would give this place one thumb up.