Since my mom got back from Texas I have been trying to catch up with her. She is a busy lady with a lot of things on her agenda so I asked if she wanted to go grab a bite to eat. We originally wanted to go to La Poblinita in San Juan Bautista but it was closed, so we drove on in to Gilroy. My mom said she had been to the Longhouse before and that it was worth giving it a Melissa Good Taste try. 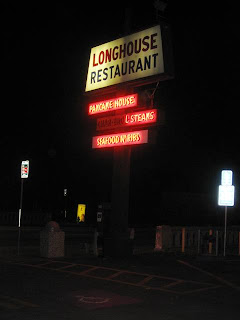 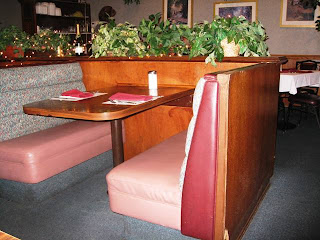 The sign must look familiar to all of the local readers. You have driven by this restaurant a million times if you frequent Gilroy often. It is located at 8195 Monterey Street and the name describes how the restaurant looks - Longhouse. My initial reaction was that the building was in a time warp. My mom says 60's - 70's, so I trust her opinion. So it is a little dated, that doesn't bother me. A kind server seated us up and took our drink order immediately. 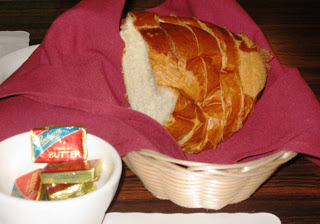 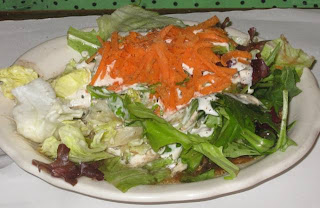 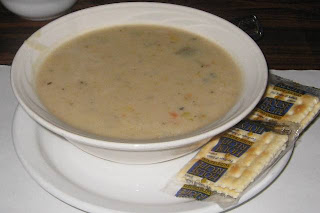 A very friendly waitress, by the name of Sandy. came up and took our orders. Bread was brought out to us by the hostess and I noticed they heated it up for us. It was scorching hot, I guess that is better than freezing cold right? In no time flat, Sandy came bustling out with my Mom's salad and my soup. The salad was swimming in dressing. I usually am in favor to more rather than too little dressing on a salad but this was kind of too much more. Ah well. My soup was corn chowder and it was pretty tasty. I didn't want to fill up on soup because they gave me a pretty big bowl. A great soup for bread dunking. 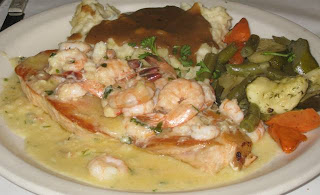 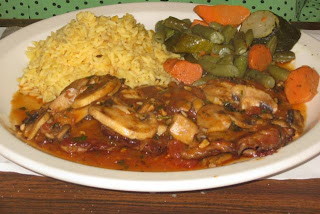 Now with our entrees... I am first up, I ordered the Fresh Salmon ala Monterey - egg battered, grilled to perfection, topped with prawns, shrimp and crab meat in a creamy garlic white wine sauce. I chose mashed potatoes and gravy for my side. I should have chosen rice but I just really like anything topped with gravy! Here's the thing, I don't know why I thought ordering "fresh" seafood from Gilroy on a Tuesday night was such a smart idea. I thought the dish tasted fine but really, I need to think out my orders a little bit more next time rather than just read the descriptions. My mom saw a special for Beef Burgundy and ordered that. I think she was sent drooling when she read it was sauteed with garlic mushrooms in a white wine sauce. The meat however was more prepared like a scallopini because the pieces of beef were pounded thin strips of meat rather than a slow roast. Whatever though, she seemed to enjoy mixing the sauce up with the perfectly cooked rice.

All in all it was a pleasant experience. I got to catch up with my mom, be entertained by our high energy waitress and try a new restaurant out to update my blog. It was a good night. I felt for the price of each meal we were served very generous portions. On several Yelp reviews people really seem to like this place for breakfast. The Chicken Fried Steak and gravy probably knock some socks off. I wouldn't mind returning to see how the breakfast plays out. As for now 1.25 thumbs up. FYI - they have a full bar at the end of the restaurant and apparently that is where the Toastmasters meet up! Wahoo!

Posted by Melissa Good Taste at 9:42 AM

i don't know how you stay so skinny eating at all these restaurants - some of the portions are HUGE.

Those portions were soooo huge! I couldn't even finish half! My mom and I both boxed up the remainders and took them home! Like I said for the portion compared to the price it was a steal!