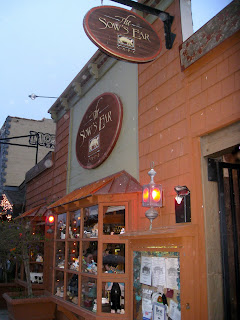 Driving through the charming town of Cambria there are people strolling the streets and plenty of shops to entertain the interests of tourists from far and wide. We drove into town with a couple of restaurants in mind but decided The Sow's Ear was our choice for the evening. 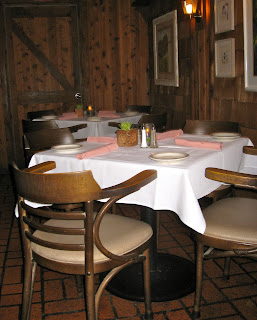 There were people waiting outside so I was afraid we could not get in, however it was early and we were pleasantly surprised. A table with our name on it was waiting for us! 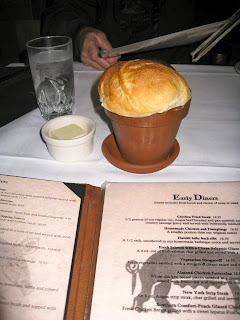 The bread was served in a flower pot. I thought it was so cute. Sourdough on one side and a nutty wheat on the other. It was warm and I am sure it was just baked. I ate more than my portion, with plenty of butter. The Early Dinner and regular Dinner menu threw me through a loop. So many choices! 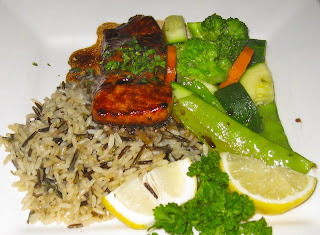 Scott chose an item on the Early Dinner menu because he wasn't very hungry. Fresh Salmon with a Citrus Balsamic Glaze was char grilled and served with a wild rice pilaf. He said the glaze reminded him of barbecue sauce, an interesting choice for fish. 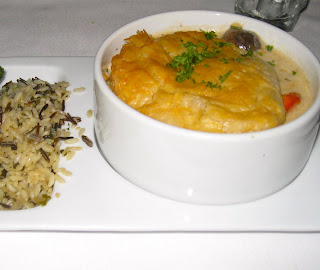 I saw several things on the menu that I wanted to try. The Sheppard's Pie, Petrale Sole and it was Friday so you know I wanted the Chowder too! But I decided to go for something that I wouldn't normally go for - Lobster Pot Pie. I promise you it was packed full of tender lobster, mushrooms, peas, shallots served in a super rich, creamy lobster broth topped in a puff pastry. I couldn't finish it by any means. It should be served for two people!
This was a lovely dinner in a historic, charming building. Over a couple glasses Santa Barbara pinot noir it was an enjoying evening on the Central Coast.
Posted by Melissa Good Taste at 7:24 AM

I have been to the Sow's Ear and enjoyed more than my share of their fresh bresd. Great place to eat on the Central Coast

It was amazing... Where else do you enjoy dining?

Cambria has some great dining places. We enjoy Old Stone Station and The Hamlet which both are excellent.The clam chowder and fish and chips are great in the garden at the Hamlet.Old Stone Station has great Prime Rib.

We love Cambria. One of our favorite places to dine is the Hamlet. Great clam chowder and Fish and chips in the garden over the Pacfic can make a day