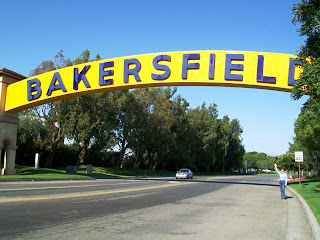 Ha ha... Welcome to Bakersfield, California! Kathy and I decided we needed to soak up some Bakersfield charm after our day at the Sundance Feedlot. So we drove under the welcome sign to the wonderful community of Bakersfield. 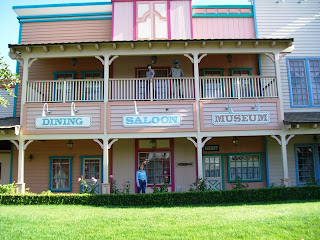 I had read on Yelp and heard from other once Bakersfield natives that a trip would not be complete had you not stopped into the Crystal Palace. Once home of Buck Owens and many other Country Performers, both legends and up and comers. 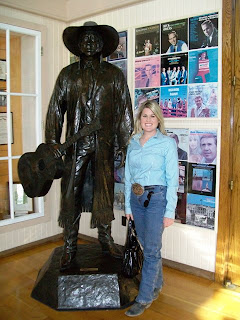 Who is Buck Owens you ask? Well, he is right here in the photo of course. No, but really... Alvis Edgar "Buck" Owens, Jr., (August 12, 1929 – March 25, 2006) was an American singer and guitarist, who had 21 number-one hits on the Billboard country music charts, with his legendary band, the Buckaroos. Owens and the Buckaroos pioneered what has come to be called the Bakersfield sound — a reference to Bakersfield, California, the city Owens called home and from which he drew inspiration for what he preferred to call "American Music". 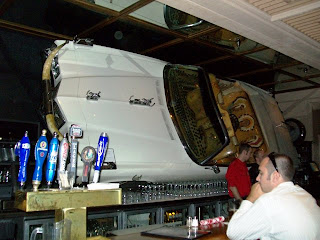 Inside the Restaurant there are huge amounts of decor... see that car located in the bar? That was Buck's -- Indian, hand tooled leather seats and all! You can explore all of the memorabilia over the years that Buck Owens has collected. Guitars, suits, album covers and more. There are also several cases of other celebrities he had met and hung with over the years. Very neat. 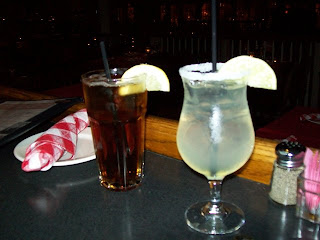 Kathy had iced tea, and I had a leaded drink. It was a long day at the cutting! A Margarita on the rocks with Patron please. :) Thank you. 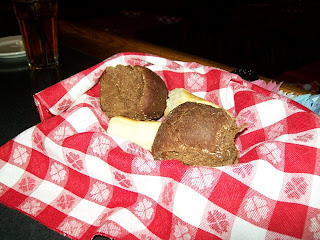 My favorite part of our entire meal. There were these little biscuits and they were tasty little buggers! Served with some honey butter, they were warm out of the oven. Tasty! The squaw bread wasn't too bad either. 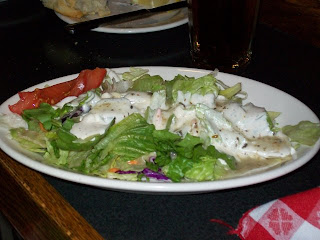 Kathy's salad was forgettable. The dressing played as a swimming pool to the lettuce and tomato. --Hey joke time-- "What did the tomato blush?" -- "Because he saw the salad dressing" ... get it? The salad... dressing... ha ha... Crack myself up! 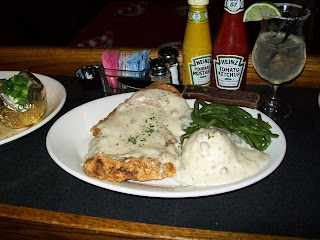 I read over the menu and it consisted of a lot of steaks... which is cool but I was in the mood for something different. I came across, "Buck's Favorite Chicken Fried Steak" -- I figured since I was in the House of Buck I might as well order his favorite right? It read as, "Tender southern chicken fried sirloin that hangs over the platter. Smothered in old fashioned country gravy with mashed spuds!" Yee-Haw! lol. Well, I will have to say, I was a little worried about how on point Buck's taste buds were, because if this was his "favorite" he had absolutely none! Not the best, not even average. Sorry Buck you let me down. The best part was the spuds man! 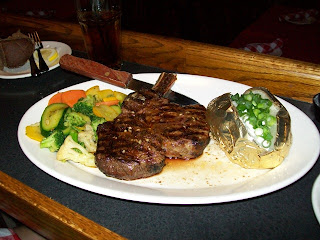 Kathy was the smarter of the two man gang and ordered something that would be hard to screw up. A Rib eye Steak! Perfectly cooked to her liking - just under medium. The baked potato with all the fixings was pretty tasty I mostly ate off her plate!!

The Crystal Palace reminded me a little bit like Disney Land. Not that it was the happiest place on Earth or anything but, the way that they sat you and the quality of food. You are sat all around a stage, that you are charged to sit and watch live performances while you eat your meal. We got in there around 5 so we just missed the first performance that started at around 7. It was an all country theme that made you feel like you were going to watch the Country Bear Jamboree performance in Frontier Land -- I swear that is what it reminded me of. The food is average. I am happy to have said I have gone to this country wonderland. Once is enough for me! 1.25 thumbs up.

Posted by Melissa Good Taste at 8:41 AM